Well, this month I have completed a grand total of ONE book... One book?!! Yup! I hasten to add, to my defence, that it is one very long book...

I have always been a fan of biographies... I find it fascinating to hear people's life stories - to find out where they have come from, and learn about the journey that brought them to where they ended up.

After watching the film, I decided to read a biography of Margaret Thatcher; also titled "The Iron Lady". John Campbell has written two larger volumes recording Thatcher's life, and this biography is an edited and shortened (!!) version of those two volumes. I'm not normally one for political books but I found this book to be a fairly unbiased (although, come on, clearly everyone writing the biography of a politician has SOME political agenda) portrait of Thatcher - her strengths and weaknesses, her successes and failures. I found Campbell to be VERY readable, and it helped me to understand the background to a lot of politics happening now. I only caught the tail end of the Thatcher era, and I was pretty young, so I found it fascinating to find out about the only female Prime Minister Britain has ever had.

Whatever you make of her, whatever your political convictions and judgements of her time in power, I think its fair to say that Margaret Thatcher was a pretty unique and incredible woman, with her steely conviction, incredible stamina and remarkable self-assurance. 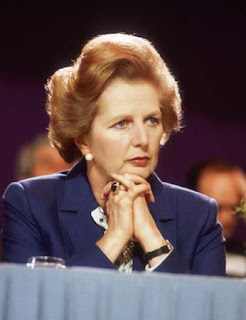 Campbell begins to conclude his biography with the following words...

"Margaret Thatcher was not merely the first woman and the longest-serving Prime Minister of modern times, but the most admired, most hated, most idolised and most vilified public figure of the second half of the 20th century. To some she was the saviour of her country who 'put the Great back into Great Britain' after decades of decline; the dauntless warrior who curbed the unions, routed the wets, re-conquered the Falklands, rolled back the state and created a vigorous enterprise economy which twenty years later was still outperforming the more regulated economies of the Continent. To others, she was a narrow ideologue whose hard-faced policies legitimised greed, deliberately increased inequality by favouring the middle class at the expense of an excluded underclass, starved the public services, wrecked the universities, prostituted public broadcasting and destroyed the nation's sense of solidarity and civic pride. There is no reconciling these views: yet both are true."
(Campbell, 2012, Location 10805)
Posted by Clarina1985 at 07:00

Email ThisBlogThis!Share to TwitterShare to FacebookShare to Pinterest
Labels: Reading