The one where she got stuck on a rollercoaster... 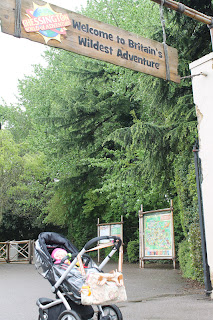 Yesterday, Ava and I, joined by our NCT group (who are fabulous), headed off to Chessington World of Adventures for a day of fun!

We got there at 11am and my little adventurer was very excited about what the day would hold (OK... I lie, she had NO idea what was going on... her mother, on the other hand, was practically beaming from ear to ear and jumping on the spot while waiting for friends to arrive... must have looked like a right weirdo!)

We had a fab day... combined some big rides for the adults with the likes of the "flying jumbos", "Toad's Crazy Cars", "Bubbleworks", "Toy Truckers" and the favourite - the carousel, for the babies!

It was all good fun; the babies were wonderfully behaved... enjoyed their dinner in Burger King (don't fear... the adults were eating BK, the kids were eating packed lunches!!) and then all took part in a simultaneous nap while the Vampire ride (with certain mummies on board) roared above them...


We were all buzzing, and after getting soaked on "Dragon Falls" decided we'd head to "Dragon's Fury" for just one last thrill before we headed home.

We left the Bubba's with Linda and Jenny, and the other four of us headed to the ride. Dee and Lou jumped in first, and Nicole and I hopped into the second car... we were advised by the operator to sit back to back if we wanted extreme spinning (which of course we did) and off we headed, climbing the dizzy heights of Dragon's Fury...

About 2 metres from the top of the ride, our car came to an abrupt halt. Me facing upwards and staring into the sky, Nicole facing downwards to a drop of about 20m... after about ten seconds, when the rollercoasters engine turned off, Nicole and I had a conversation that went something like this...

Nicole: Have we been on this ride before?

Nicole: Errr... did it do this last time?

OK. Panic set it. Actually, we managed to stay pretty calm while people at the bottom tried to communicate with hand gestures and a microphone system that was RUBBISH and was so quiet I could barely hear they WERE saying anything, never mind WHAT they were saying....

Twenty minutes later, we were still hanging... and beginning to get slightly frustrated as we had no idea what was going on, except that a small crowd had gathered beneath us, including a number of staff who thought it was fun to point and laugh, and a number of rather technical looking men who were strolling around, gazing up at us with a look of "ponderment" on their faces (is that a word?!) and seemingly no sense of any kind of urgency whatsoever...


Lets just say, by this point, Nicole and I were struggling to see the positive side of things, trying to keep each other in good spirits with comments like "Well, I guess we can be grateful we didn't stop on the sideways/upside down bit" and "at least its us up here and not some little kid", but we were getting frustrated at the seeming lack of urgency going on below. What was hardest of all, was that we had NO idea what was going on, and after 20 minutes of waiting, had no clue whether we were likely to be stuck up there for another 20 minutes... hour... 2 hours (terrified thoughts like, "I need to feed my baby" and "what if we just roll backwards down here - I'll die - and then she'll have no Mama" and ridiculously overdramatic things like that DID roll through my mind!)

Finally, two wonderful gentlemen in harnesses and bright yellow hard hats, made their way up the side of the rollercoaster to us and explained they were going to harness us up and remove me first, before spinning the car to get Nicole out.

It was all adrenaline rush, panicked looks down to check the babies, Georgie and Ava, were OK, and trying to encourage each other that all would be alright and that we would survive this ordeal, with the absolute certainty that surely we would get free tickets after this fiasco.

When we finally made it down, escorted by our two rescuers, we were assured that compensation would be received and that we just needed to speak to the man in the white shirt who would take our details.

So the four of us (Lou and Dee were also stuck on the ride for the same length of time, though in a slightly less lethal position!) went to give our details and receive our compensation...

Well apparently, seeing as we were "only up there for 20 minutes" (their words) we would be able to get a £5 voucher for sweets for our children to spend at the park.

1) WHO gives their child £5 worth of sweets?? Like, seriously, Ava only has 4 teeth, I'd rather she didn't loose them all already!
2) Sweets? For 8 month old babies?!?

Right. This was Nicole's moment of glory. The other three of us sat back as she shot daggers and raged at said man in white shirt (all in a very controlled, proper, but rather awe-inspiring way)... but sadly to no avail.

We left CWOA without even our £5 sweet vouchers, still shaking from the adrenaline and trying to remember the lovely day we'd had before white shirt man ruined it!

We have received no compensation for our traumatic ordeal. I'm not loving CWOA right now. We are not the best of friends.

But here are the memories I am trying to hold onto, from what was otherwise a very lovely day out!

It was a great day out... we're still attempting for free tickets, but doubtful we'll get them...

... at least we'll have a funny story to tell the grandkids one day!