... but not without a number of obstacles hitting us on route!

I'm sitting here in the lounge looking out on this view... 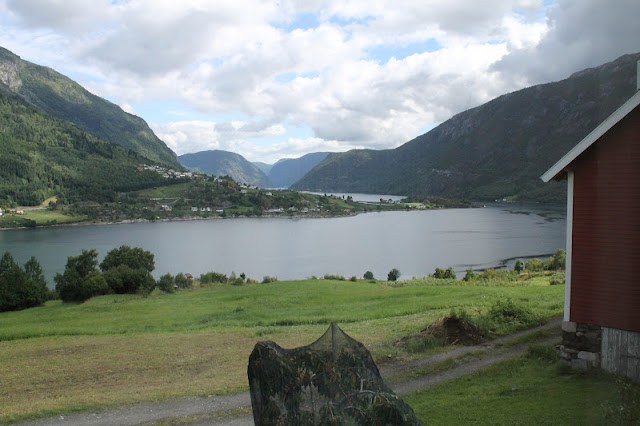 We had rather an eventful trip... we discovered late Sunday night that our flight had been cancelled and we had been transferred from a direct flight from Heathrow to Bergen, to a changeover - Heathrow-Stavanger, Stavanger-Bergen. Not a major problem, just meant we were leaving two hours earlier that expected and carting an 11 month old through multiple airports without a buggy! Joy of joys. To be fair to her, Ava was good as gold, and made the whole transfer thing look easy...

What we weren't informed of, however, was that because Norway is outside of the EU, your luggage doesn't automatically get transferred from one flight to the next (even though we were checked in from London all the way to Bergen). We arrived at Bergen, blissfully oblivious that our luggage was still carouselling back in Stavanger. Again, wouldn't be a major problem if you hadn't just used your last nappy, while two big bag fulls are packed in a suitcase 120 miles away... thankfully I just had enough and was able to change her when we were reunited with our baggage!

Our baggage arrived on the next flight, which meant two hours of hanging around at Bergen Airport, although perhaps it was a blessing in disguise as Ava, who had been in a car-seat/ on our laps in a plane/in baby bjorn through airport since 9am (it was now 7pm!) was able to stretch her legs and crawled merrily around the airport charming everyone and making a beeline for random dogs! We filled ourselves up on hot-dogs (you literally CANNOT beat norwegian hotdogs... they are AMAZING), pizza (all very healthy stuff) and pancakes. At least Ava had Ella's Kitchen!

We finally got on the road, and I'm glad to say it was all smooth from there! Little monkey didn't fall asleep until 9.45, so excited she was by all the fjords and mountains and grinning like a cheshire cat! She slept like a log until we got to the ferry at midnight, then the eyes popped open and her and Papa went exploring, looking at the water and watching the lights!

We finally made it here at 1am, Ava transferred straight to her bed, and we followed not long after. So excited to be here and ready to relax by the fjord for a couple of weeks!
Posted by Clarina1985 at 10:26