Lately, my big girl's had a real interest in letters... she asks about letters all the time, spots "A for Ava" everywhere, and is keen to hunt down letters while we're out and about. Its not something I'm actively pushing, she's only two-and-a-half and will have plenty of time for letters next year, but I'm happy to encourage any natural interest she has in learning.

But her favourite letter activity took me by surprise! Dave and I had left the Banagrams game out after playing the other night after the girls were in bed (we're seriously hard core in our house!) and I came downstairs in the morning to find this... 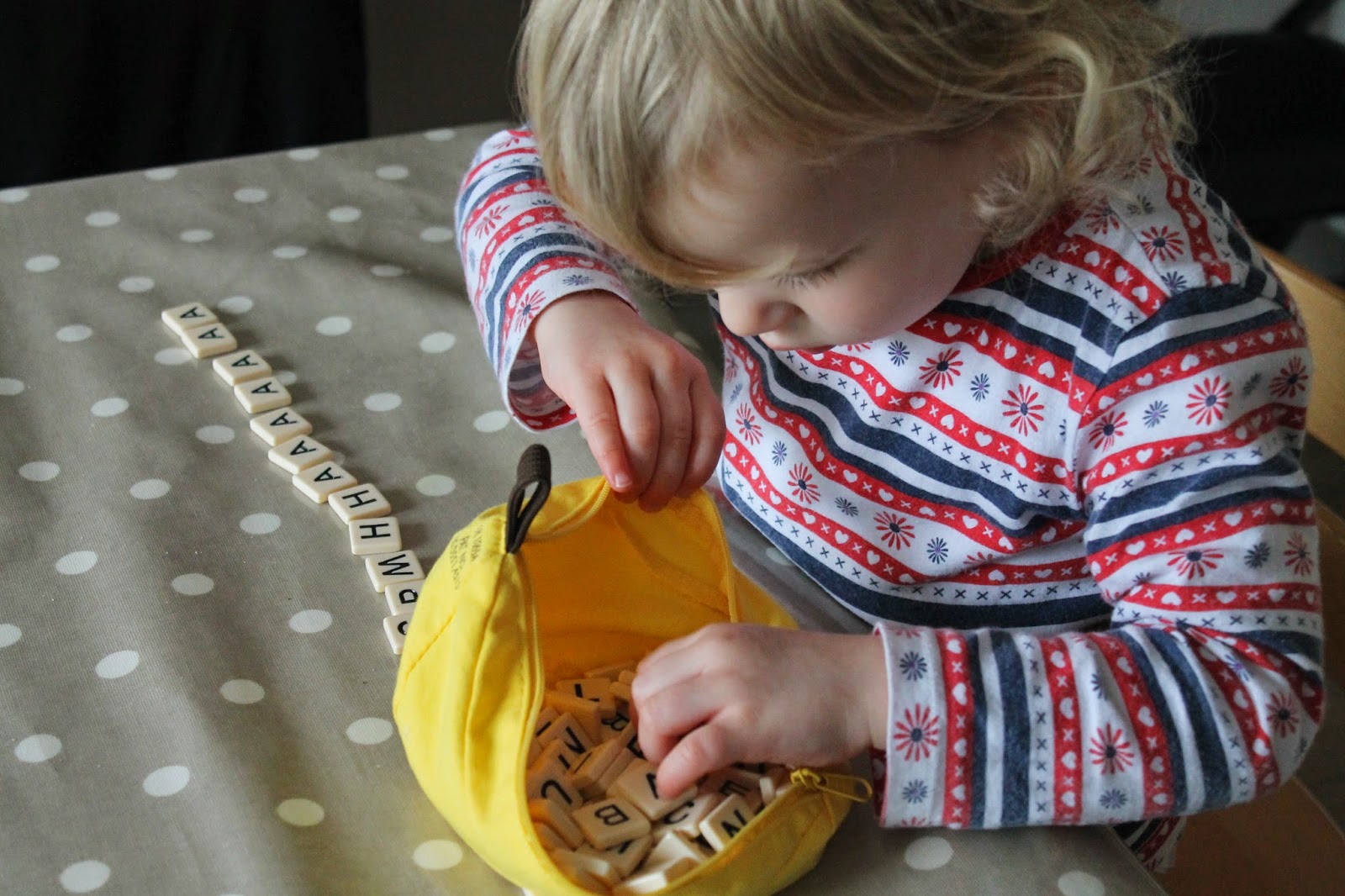 She proceeded to tell me all the letters she'd found, and was delighted when I gave her a load of classy IKEA plastic bowls to sort them into! 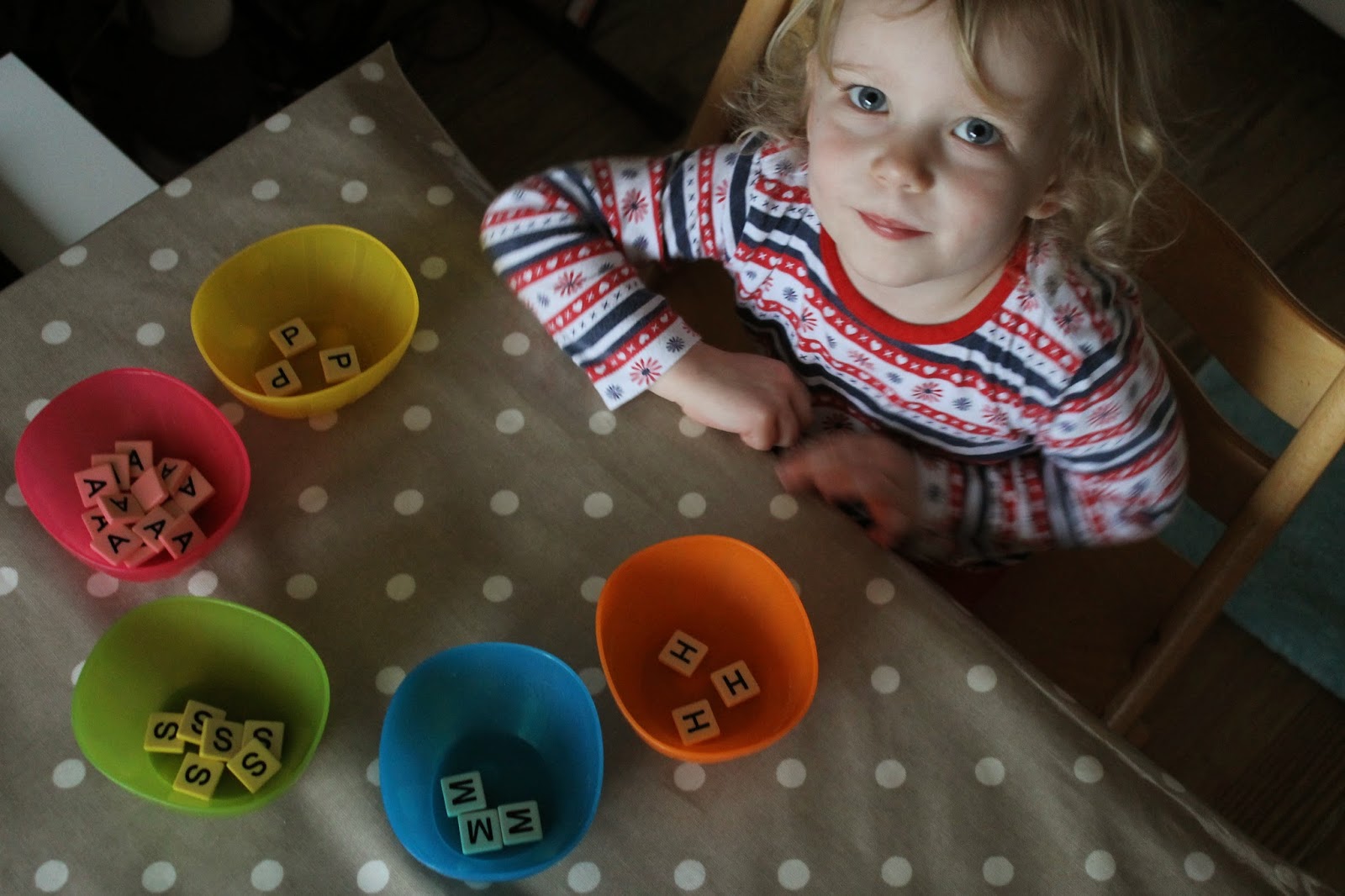 There was lots of fun to be had...

So here we go... Ava's own invention of Banagram letters... here's some of the things she's had fun doing with them (effectively you could do this with scrabble letters too!) I've found this little game to be fabulous for a number of early reading/spelling activities so thought we'd share our ideas... they may come in useful to someone, somewhere! 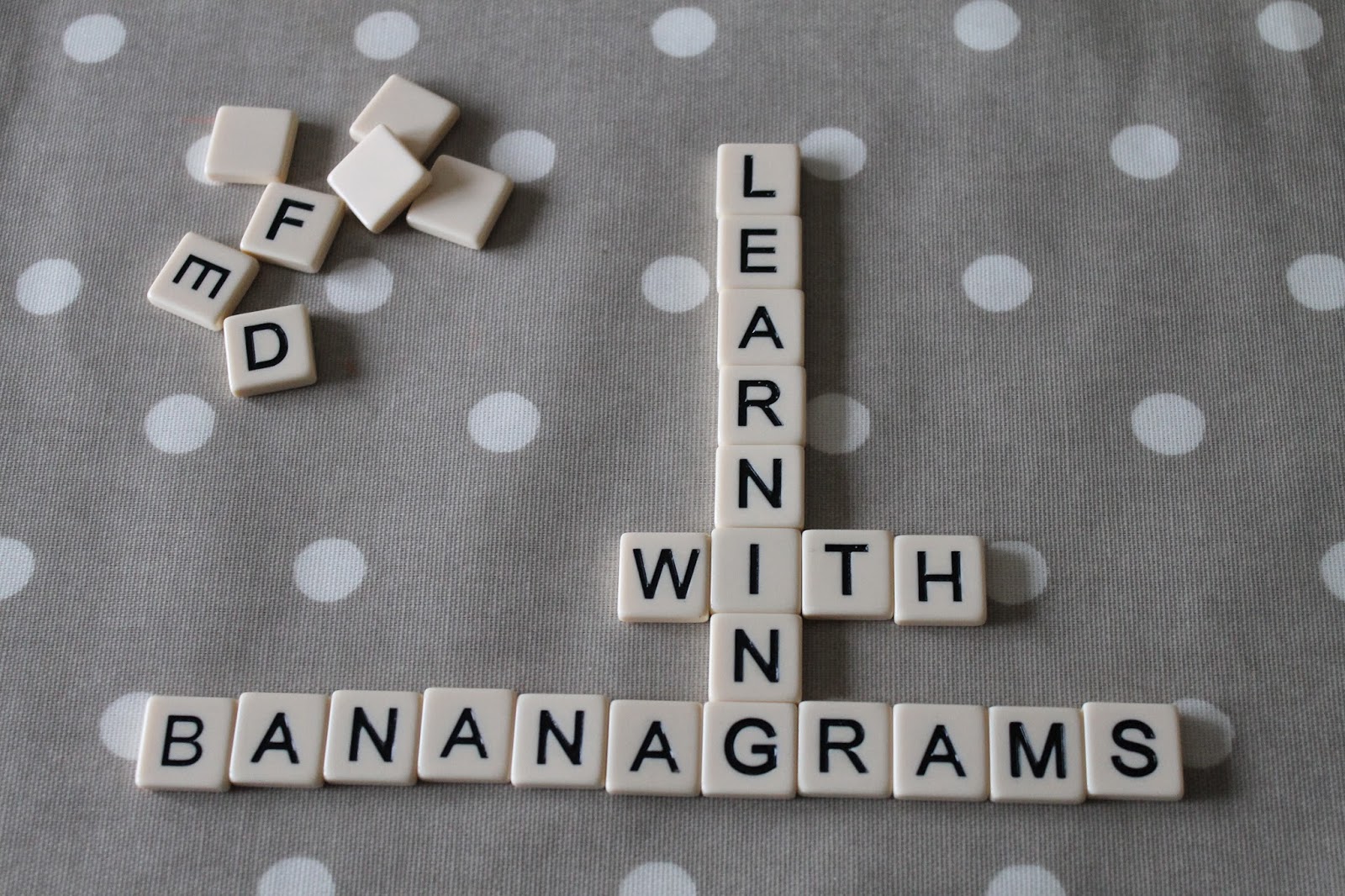 1. Letter Recognition: Find as many as you can of a letter Mama says and make a big ol' letter chain... Ava's favourite letter is, of course, the letter A... and she's rather fortunate that there are a serious number of As to be found! 2. Letter Sorting: Sort letters and then name them... this has been Ava's favourite game, and I don't think its an exaggeration to say that she has played this game independently at least twice a day for the last three days! Each day, she's been adding another letter to her repertoire! My only problem is, I'm running out of plastic bowls! 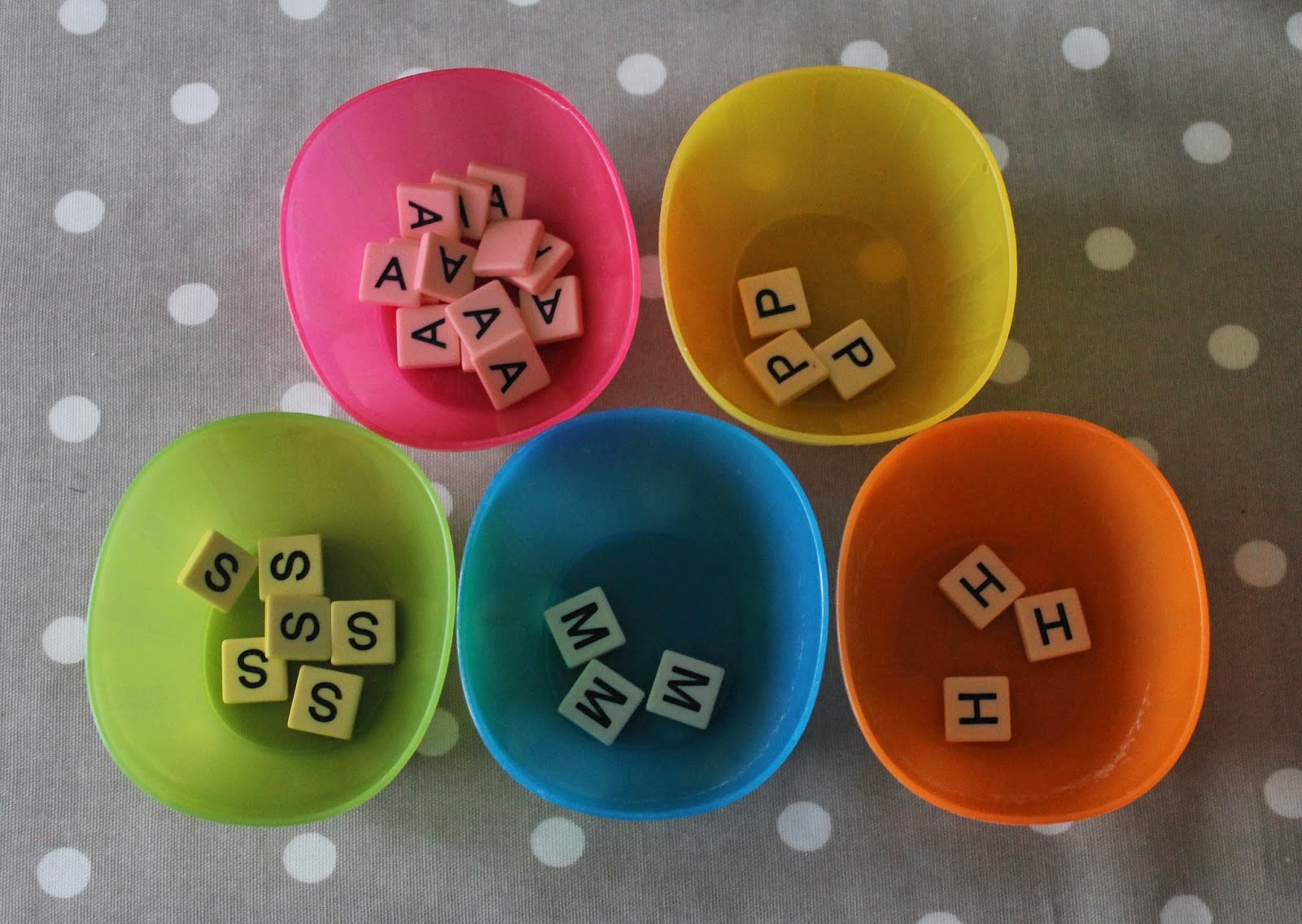 3. Play with words: Ava can only write her name at the moment, so we're at the early stages with this one... but there is so much potential here for practicing spellings for spellings tests, sounding out words, playing with anagrams... all sorts! 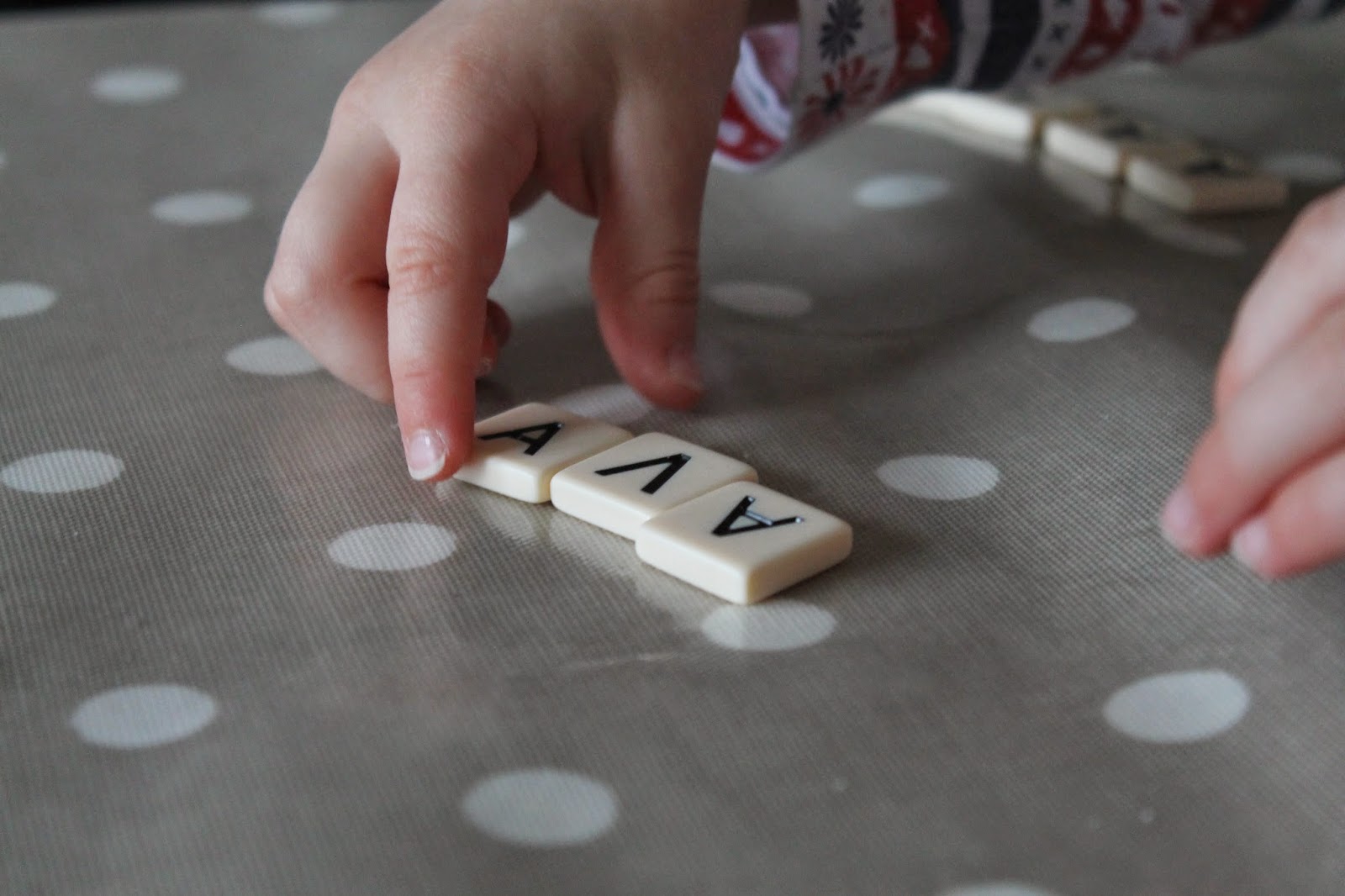 My only regret is that I didn't have Ava to help me out with learning inspiration when I was still in the classroom! Clearly we have a teacher in the making!!