Dave asked me the other day whether it bothers me that the girls are both blonde, while I am a firm brunette...

"Not in the slightest," I answered "I haven't really ever thought about it..."

And with that, I began to think about it... I guess with the impending arrival of number three, you do begin to think about how your children resemble you and your spouse...

Will this next one look like me, or Dave? Or a mixture of both?

Our eldest definitely has the Scandinavian genes... The golden blonde hair, the bright blue eyes, the skin that tans effortlessly... Yet at the same time, the resemblance between herself and myself at the same age is striking. Anyone who knew me as a small child always comments on how like me she looks. I don't see it now, but I can't deny there is a definite likeness in all pictures of myself around that age!

I watched her colouring away the other day... My little artist. Her likes and interests so like mine, but her colouring so like her Father's... The backlight coming through the patio doors just made those golden locks glow, and I was struck again by the wonder of parenthood. Of the fact that these little people, with personalities, likes, dislikes, opinions, were made by us. They image us in so many ways... And how incredibly intricately God has planned the whole design... 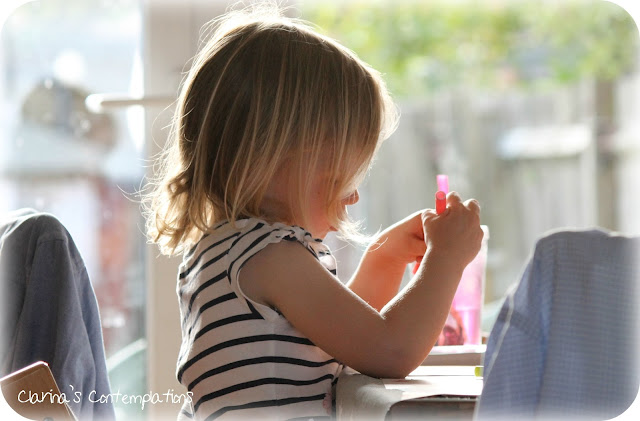 This gorgeous, golden, glowing little person, completely absorbed in her creativity, was in that moment totally mirroring both her parents... Her Father's blonde hair and blue eyes, and my love of all things creative... And yet, at the same, totally her own little person... With her own identity, personality and utterly separate from us.

It is a miracle when you think about it. 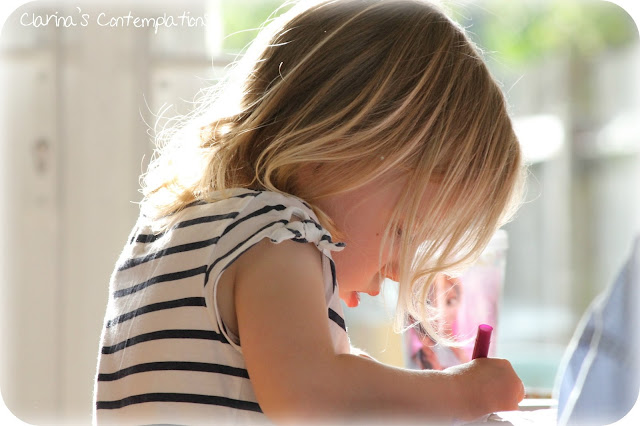 Yesterday, I was cleaning up the house and I walked into the girls bedroom where Heidi was playing. There were puzzles covering the floor, she had three board games out and a pile of books. I decided not to disturb her, but allow her to continue to play while I finished off the housework. Disturbing her would only mean I had a little person trailing after me... I decided we could tackle the mess together afterwards.

About ten minutes later, I was downstairs finishing off the hoovering when I heard a little voice from upstairs...

She had started to clamber down the stairs armed with one of the board games she had had out upstairs. I stopped her in her tracks...

"OK Heidi, let's go tidy up your room before we play the board game..."

I followed her into the room and froze.

It was utterly spotless.

I literally laughed out loud. This was her Father all over. Our little girl of order who instinctively tidied up?

Let's just say she didn't inherit that gene from me!!!

It's amazing, and exciting and scary to think how much our children resemble us... There are so many ways they mirror us due to nurture, but more and more I see the instinctive nature coming through as well... And that's scary. Because in amongst all the good characteristics and traits there are also the not so good ones.

And that why parenting can be so hard at times. Because in the stubbornness, the negative attitudes and the wilfulness of our children, don't we so often see ourselves? Simply in a less socially aware way?

And that is why I'm thankful that my girls don't just have to image Dave and I, but ultimately their heavenly Father. And I'm praying every day that as the grow, its Him they'll seek to resemble, rather than us!
Posted by Clarina1985 at 06:30