The air cooled quickly after sunset that night. The muggy heat of the day dropped as the little band of men drew close to the crackling fire. Hands out, hovering over the flames as knees rattled in the cool night air... Eyes darting left and right for any sight of movement from the undergrowth. Mutterings under their breath and the occasional guffaw at a shared joke.
These men were raw and real; there were no niceties or polite British manners... They shared life knee deep in sheep poo and fought off wild animals with their bare hands. These men were familiar with the extremities of the weather; the intense heat of the day and the icy cold of Israel's nights. There were long hours of dull boredom, hours of sitting round with nothing to do and nowhere to be... No job prospects or promotion hopes. And yet the dull days were interspersed by the violent attacks of thieves and beasts.... It was not an easy job... Left to the lowest of the low... Those willing to work long hours on low rations and low wages. Israel's despised.
That night another long night-shift began as they huddled round the fire. Except that that night, the silence was not pierced by the familiar cry of "ATTACK!", but instead by a brilliant light that almost blinded them. Arms were thrown over their eyes as they fell to their knees in dirt and mud, seeking respite from the light that dispelled their darkness. They crawled in the dust, terrified, until a voice pure and clear boomed out of the brilliance...
"DO NOT BE AFRAID!"
Trembling, unable to peel their eyes from the blazing glory...
" I BRING GOOD NEWS TO YOU... OF GREAT JOY... FOR THE WHOLE WORLD. RIGHT NOW A BABY HAS BEEN BORN IN BETHLEHEM... HE IS GOD'S SON... THE SAVIOUR AND RESCUER OF HUMANKIND! GO AND FIND HIM...WRAPPED IN SWADDLING BLANKETS AND LAID IN A CATTLE TROUGH"
They stare in stunned silence and disbelief when suddenly, the light seems to explode and multiply and the whole sky is filled with blazing glory... Voices boom in glorious song across the heavens.
"GLORY TO GOD IN THE HIGHEST, AND PEACE ON EARTH TO MEN, ON WHOM HIS FAVOUR RESTS"
Then in a split second they are gone. A roar and then silence. Only the crickets to be heard, and the snuffled weeping of hardened men drying their eyes. Eyes filled with joy. For a moment they sit there; unable to move, unable to break the silence... Until one stands, laughing through his tears...
"Come on! Let's go and see!"
They jump to their feet, abandoning fire and sheep to the darkness of the night and run, feet tripping over cobbled stones through the silent streets of Bethlehem... Tears of joy still flowing as they grind to a halt at the low entry to a cow shed and gaze in.
There is the Saviour. Wrapped in swaddles. Lying in a food trough.
Just like God had told them.
And they weep.
Their Saviour had arrived. 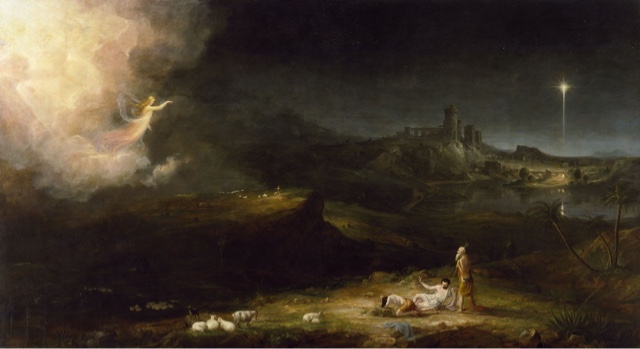