Language is an incredible thing, isn't it? I have been absolutely amazed, these past couple months, as Ava's vocabulary has expanded, to see how much she soaks up without me even realising it. She is literally picking up a word a day and its so much fun.

I love wandering the streets to the delighted cries of "Au-to!" (car), and watching my daughter climb up on the chair and reach for her favourite DVD and call out "Heidi! Pe-ter! Baa!" (there are a lot of goats in Heidi!) Its so rewarding to be woken up in the morning by a little voice calling "Mama?" and hear her cute names for her soft toys "Ber-yi" (Bearli), "Gre-gor" (MacGregor) and "Baby". She calls out any version of "heit", "heiss" or "hot" at every hot drink, radiator, oven and candle... 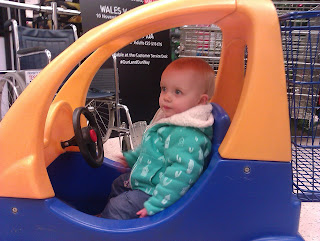 The funniest thing we've come across with the whole trilingual thing, is that Ava seems now to be beginning to distinguish between the languages. On Tuesday, some friends came over and were asking about how its working out. I replied that Ava is able to say a few words in each language, but that she understands most things you say to her now in any of the three... I turned to Ava and said,

"Was sagen die Ente, Ava?" (What do the ducks say?")
"Quack, Quack!" came the immediate response...
I then turned round to her and said, in English,
"What do the ducks say Ava?"
She looked at me, frowned slightly and then looked away. When I repeated the question, she point blank ignored me.

I have to admit to being slightly confused by this reaction - I KNOW she knows the answer to that question - she answers to my Mum all the time, and it suddenly dawned on me that perhaps she was beginning to recognise which language she was being spoken to in and associating languages with certain people. In other words, she wasn't answering me because I was speaking the "wrong" language to her...

I was telling my Mum this story yesterday and decided to try it out again. Again, she answered me in German, and then point blank ignored me in English. The minute my Mum asked her, she responded happily.

How weird is that?!

It reminded me of when I lived with the bilingual family in Austria and occasionally spoke to Kaya in German (Kaya was 2 at the time). Every time I did, she would turn to me with an angry face and say:
"Claire! No! You speak English!"

This whole trilingual thing is a HUGE learning curve for us - but its so very exciting to watch it unfold and its incredibly to see how such little minds are capable of sorting out such complex stuff. I guess being secure and confident in what language each of us speaks to her has enabled Ava to figure out what it is we're saying. The moment we "mess up" the system and speak the "wrong" language to her, it throws her into confusion!