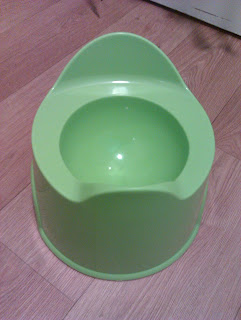 This is going to be one of those posts that, in years to come, I know I will probably live to regret... one of those ones where my teenage daughter will cry out...

But given that this blog is a place for offloading the bizarre thought-processes of my brain, as well as being some form of record life in our family and our children's growing up years, I couldn't really avoid this fairly major issue...

We are attempting to begin potty training.

Yes. I know its madness. I know its early. I know it seems ridiculous. I thought EXACTLY the same thing when my mother-in-law kept insisting we get the ball rolling on it, but after trialling the "prep" stage for the last few weeks, very casually, I have come to the conclusion that Ava is at least up for giving it a go... so giving it a go we are...

About a month ago, when Ava was just over 15 months, we starting whipping out the potty occasionally, and we were EXTREMELY lucky in that Ava just happened to wee on the potty the very first time we put her on it. It was first thing in the morning, I had just got up and was heading into the bathroom and thought I may as well stick her on it at the same time. Lo and behold... 2 minutes later there was joyous dancing in the bathroom, shouts of "Dave, Dave... come look" and Ava looking a confused mixture of great joy and pride at whatever she had done that had pleased Mama so much, and slight fear at this bizarre display of celebration! We were lucky, because it was chance - and although it probably did help that I had told her what to do, and she was there at the same time as me - I can't deny that it was just very fortunate on our part. The great thing about that "pure chance" was that Ava  therefore knew what the potty was for, and what we wanted her to do on it.

Fast forward a month, and I've been sporadically trying her out on it, plonking her on whenever Dave or I use the bathroom, and sitting her on it first thing it the morning. While she's on it, she's surrounded by books, a couple of which are board books about using the potty, and its been pretty successful. She hasn't performed every time, but has been not far off. She still looks with wonder at the puddle in the potty every time, perhaps wondering how on earth it got there!

Ava has been telling me for a couple of months when she needs a number two, so I knew that we had to bite the bullet with that one, and this weekend we had our first success story. She looked so chuffed with herself, bless her. And I was literally dancing for joy... the thought that she could perhaps be trained before the arrival of number two seems too good to be true (and I'm not holding out on it - if she has a positive relationship with the potty, thats enough for me)

These next couple of days are pretty manic with new years etc, so I've decided to hold on to our relaxed "prep" phase for a couple more days and then attempt to bite the bullet on Wednesday... we'll see how it goes. I don't want to pressure her, or force her into a negative view of the potty. She's been really positive about it so far and I definitely don't want that to change... but come Wednesday we'll give it a go. If it doesn't work, I've not lost anything, and if it does? Well... that would be utterly amazing! But I'm convinced she's ready mentally. We just have to see if she's physically able with the whole control thing yet. At 16 months, she's pretty young, but certainly on the continent its not abnormal to have them trained by 18 months. All I know is if I leave it til after Bubba 2 arrives, it will get shelved for another six months at least... and part of me thinks if she's up for it and is able to communicate, follow instructions and wants to please, then surely its worth having a go???