Our House Renovation Project // The Loft Conversion: Week One 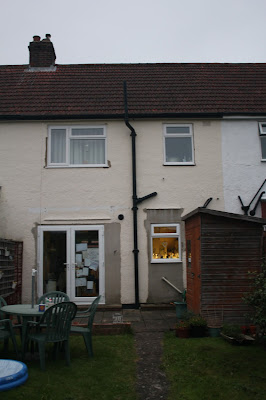 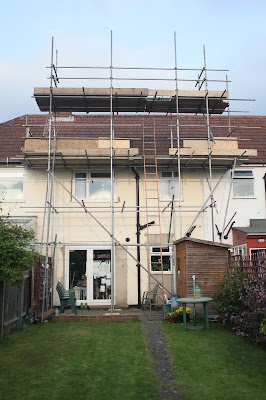 Well here we are, one week into the craziness, and actually feeling remarkably sane! We have had the best start to our loft conversion experience... our builder and his sons have been a pleasure to have around and have caused very little disruption so far. Jonas has managed to sleep through the noise above his head, and there has been no mess or dust inside at all.

The scaffolding went up last Friday, and the girls are loving watching the builders springing up and down that ladder, and Heidi has taken it upon herself to make sure they are well watered...

She has also decided she'd like to be a builder when she grows up...

On Monday, they built the internal ceiling... the only time they've actually been inside the house at all. Scott has built a ceiling in 6 inches below our current ceiling in the landing, so that any mess made upstairs stays completely in the loft. We have not had a drop of dust so far!

Tuesday and Wednesday were spent clearing out the fibreglass and boarding and preparing for the steels to go in...

And on Thursday morning they arrived!

Having a crane lifting huge steels over your house is really exciting when you're four (and slightly scary when you're 30!! Cue visions of one of those things swinging straight through your bedroom window... eek!) 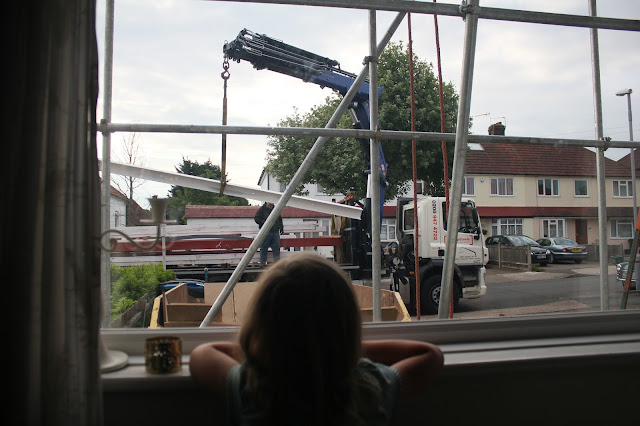 It was all rather exciting though!

Now that the steels are in, the work can really begin. On Friday afternoon, while the littles were sleeping, Scott invited me up to take a look... it was pretty cool to see! I looked skyward the whole way up that ladder... heights don't bother me, but it felt pretty high up the top!

There is SO much work that goes on behind the scenes before you see anything from down below!

And I got a pretty cool view over our little suburb while I was up there!

So that's us, one week in! And so far the experience has been pretty painless!!

Email ThisBlogThis!Share to TwitterShare to FacebookShare to Pinterest
Labels: Home