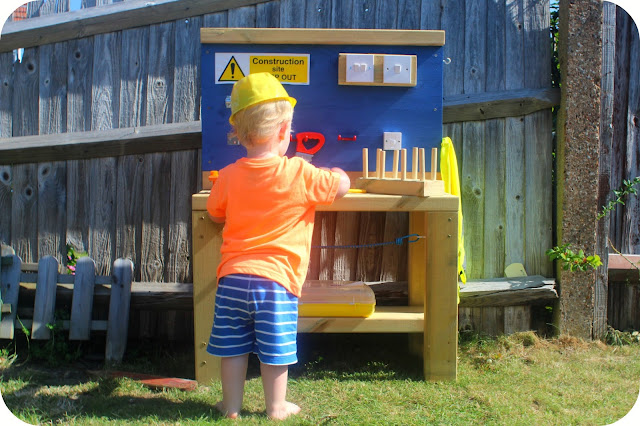 Our Jonas has three loves in his life... Bob the builder, football and weetabix! He's a little lad easily pleased... A ball and a hammer will keep him amused for hours (just beware not to have anything breakable in your home!) and so when it came to thinking about what to get him for his birthday, I knew straight away a workbench would be right up his street.

Except in typical me-fashion, I had a very specific idea what I wanted... Something wooden, that could live outside, and that would be sizeable enough for all the children to appreciate.

Needless to say, no such thing existed, and the closest thing was a few hundred pounds outside our budget...


When looking for inspiration, I headed to the best place I know of and started adding pictures of other's creativity to my Pinterest board (you can check out some of the other inspirations here - some seriously talented people out there!!). I loved the idea of combining the traditional workbench idea with the more modern idea of a fiddle board (you know, those boards for children with locks and bolts and switches etc) A bit like this one I discovered below...


I soon discovered a tutorial and plan for a workbench that particularly grabbed my attention, though it was slightly smaller than what I had hoped for. So when Dad offered to help, I sent him the plans, and that weekend we got to work. 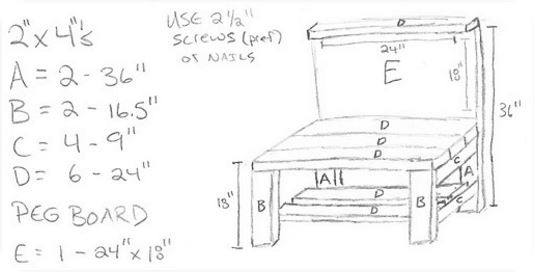 We borrowed the measurements (above) from another blogger who had made a lovely workbench for her son, and just scaled it up slightly as we wanted it to work for all the children, and to have some longevity in terms of play-life... you can check out her original design here.

Our measurements were in keeping with the IKEA kitchen the children have in their playhouse which is the ideal size for all of them at the moment (our five year old down to our two year old.)

So we invested in four 2.8m planks of pressurised wood, and two packs of these 80mm screw, all for less than £30! 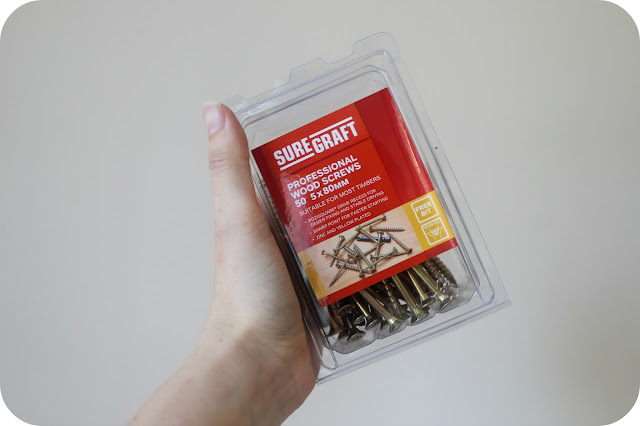 And so we got to work... Dad cut, I sanded and drilled and screwed until it began to take shape... 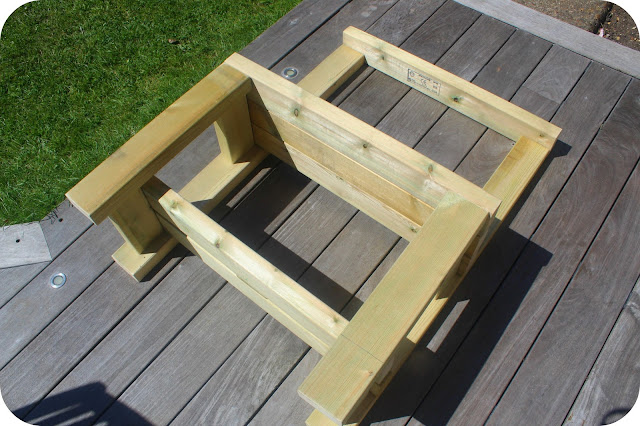 Dad had all the gear toolswise, which meant it was actually a remarkably easy project - a jigsaw, a drill and an electric screwdriver and we were sorted! 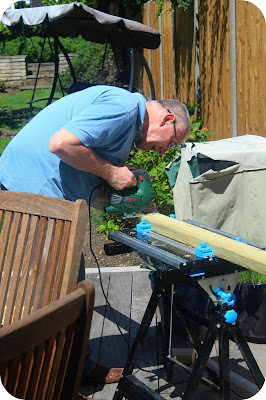 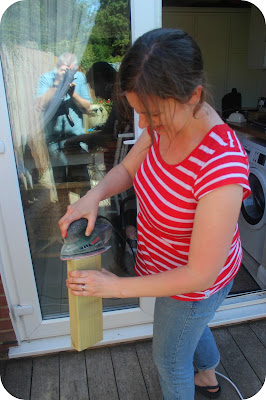 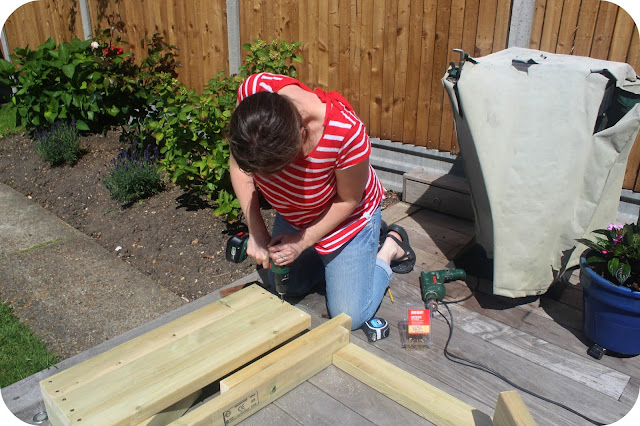 The basic skeleton was built within 3 hours (which included a short break as the baby needed fed!) 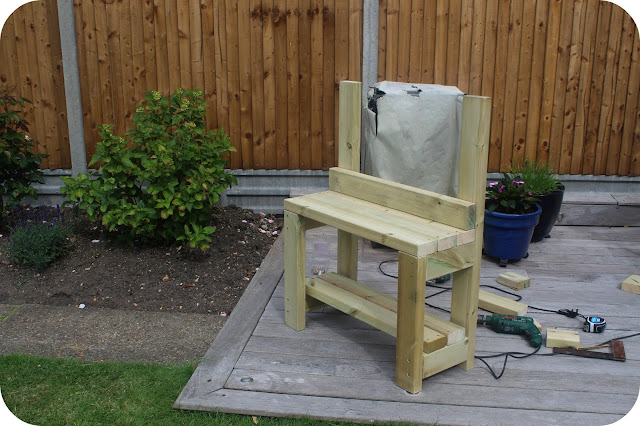 Then it was over to me to create the backboard - paint it in exterior wood paint (I used some we already had), purchase some bolts and locks for the fiddle board and get to work. Dad sourced some old light switches and embedded them into one of the off-cuts so Jonas could happily switch away to his hearts content! 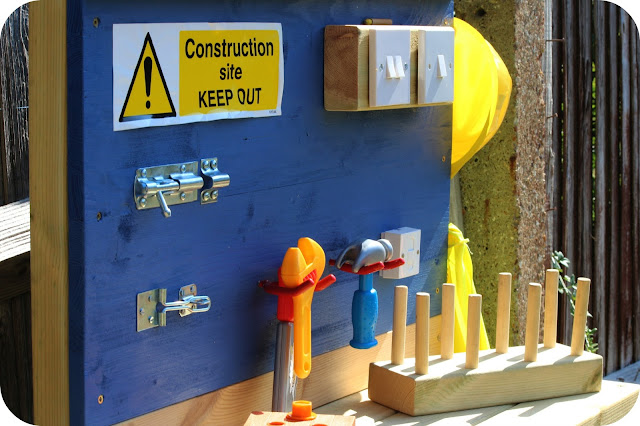 I bought a cheap plastic toolkit off Amazon for him too... he has a lovely wooden one already, but I wanted one that I was happy to keep outside, as the plan was for this to be an outdoor play station.

Our little builder could not be happier with the outcome... 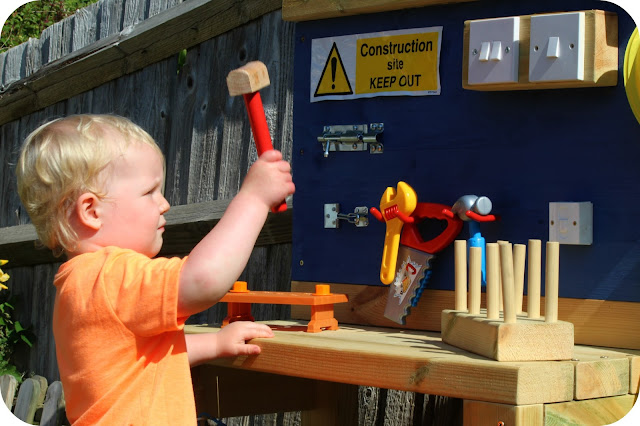 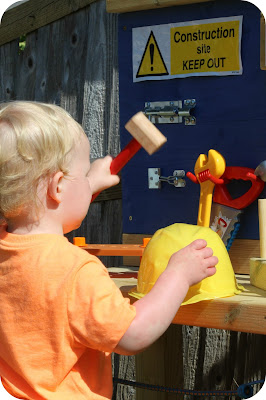 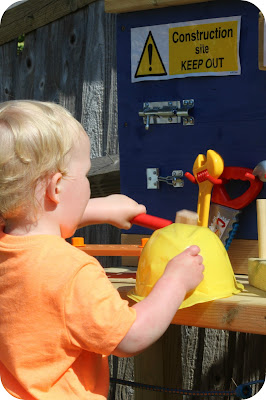 Now to gear up for our little builder's "Diggers and Dumpers" birthday party on Saturday... 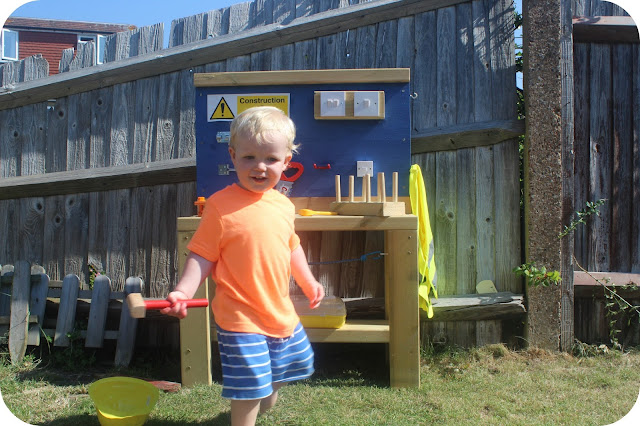 Email ThisBlogThis!Share to TwitterShare to FacebookShare to Pinterest
Labels: Homemade