The Slow Life // The Gift of Observation 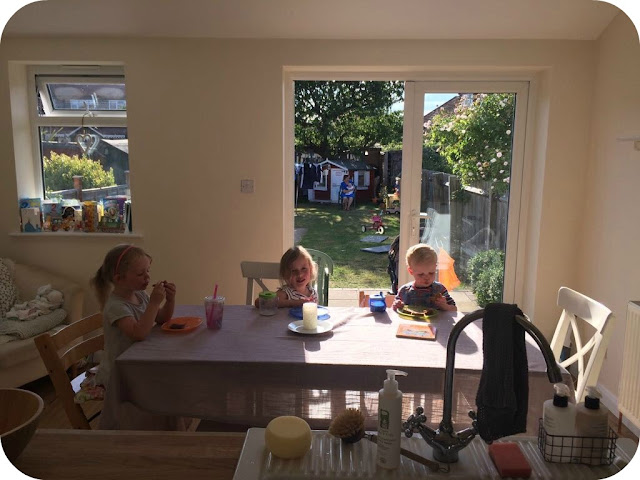 Dave took this picture on Saturday evening. It's a very ordinary scene. Three children sitting at the table, eating supper before bed on a sunny Saturday evening. In the background, though, if you look carefully, you'll see me sitting on a seat in the garden with a little babe in arms.

It was a few moments of still after a fun-filled, busy day. And as I sat there, I had no idea Dave was taking this picture, or capturing this moment... because, from the other side, I was doing the very same thing.


I was capturing a moment. Not on camera though, just in my minds eye... freeze-framing an ordinary moment in time and just observing.

Observation. It's something I have very little time for these days.

I remember back in my teaching days, in my first year, as an NQT, when everything was new and fresh, I was given the opportunity to observe my class being taught by another teacher. In this instance, the purpose was not to watch the teacher, to learn from and glean from a more experienced professional, but rather to watch and observe my 30 children.

To see if there was anything I was missing from my up-front viewpoint.

I saw the invisible children... not the loud ones, the attention-seeking ones, the naughty ones, the highly intelligent ones or the obviously withdrawn ones. But the children who did what they were meant to do without drawing attention to themselves, but were perhaps not being pushed to their highest potential.

It was such a wake-up call.

Sometimes... as a Mama, I try and recall that exercise and do likewise. Just to stand and observe. Observe the interactions, the relationships, the subtleties, the quiet comments under-breath, the sneaky snatch, the sibling dynamics. In the reactive moments of my day with four children, I tend to act on what I see immediately before me, without, perhaps, seeing the subtle situations that have led to a particular moment. Living life in the fast lane makes that inevitable - assumptions and reactions, angry words and misunderstandings. I've been there enough times to know. And that's why I'm incredibly grateful for the gift of time as a stay-at-home Mum. It's something I don't take for granted.

Four children in, and I'm still learning so much. It takes time, and energy and thought to reflect on how I'm developing and growing in the area of motherhood. Am I happy for my children's childhood just to be a string of reactions? Or am I willing to slow down. To stop. To observe.

Because surely in the observation we'll see the truth more clearly. The intricacies of emotional development, the beginnings of learned negative behaviours that need nipped in the bud. The daily training and disciplining in love. The ways in to difficult conversations.

As a teacher, I wanted to observe my students so that I could be the best I could be for each one of them as individuals, why would I want any less for my own children.

God has gifted me the honour of motherhood. It's a role I know too often I have let happen day by day without taking a moment to pause and take stock. Too often I've responded and reacted and lived in the moment. There has been no purpose or direction, no long-term view or goal.

The truth is, if I want to teach and correct and train them well, I need to stop.