One of those days: screams and sobs all round!

Yesterday was one of those days... a bookend day. Marked on each end by two rather dramatic events and tears from Mama and Bubba! Oh dear... I'm sharing this because I think sometimes blogs can lead you to believe that life is always great, that family life is always rosy and that everything always falls perfectly into place, children are beautifully behaved and Mum remains composed and in control at all times.

Yesterday was evidence that this is not the case.

I got up at seven, and bleary-eyed forced myself down the stairs to say goodbye to hub, and take the opportunity to spend some time with God before Little Miss woke up. I did manage, at least, to read my Bible, and was just about to pray when I heard that little voice, "Mama?". Normally, Ava will chatter to herself/sing some self-composed jibberish song for a few minutes before she really starts calling for me, but this particular morning's Mama-call was followed by a moment's silence before a sudden outburst of distressed screaming...

I jumped out of my seat, flung my bible to one side and launched up the stairs two at a time (no easy feat at 39 weeks pregnant) and burst through her door expecting to see blood or a trapped body part or some such emergency, only to discover my daughter's screaming had been caused by the fact that she had dropped her beloved Bärli (her little teddy that she sleeps with) on the floor!

Fab start to the day! (In all honesty, very relieved it was only Bärli!)

We had a lovely day... Catching up with friends this morning, nap time (when I crash... Literally!) and then a lazy afternoon sorting and hoovering and hanging out washing. And then this evening happened...

I was cooking dinner and had a pot of chilli on the stove and jackets in the oven. Ava was pottering around me, whining about something in the usual way one-year-olds do when they're getting tired, and I was getting increasingly frustrated. Dave had just walked in the door and was unloading a tonne of shopping when suddenly there was an almighty thud, Ava was at my feet, the oven door swung open and I felt a shooting pain in the centre of my tummy. I flung Ava away, out of the burning oven's reach and grabbed my tummy. Ava had swung on the oven door, pulling it open and hitting me right above the belly button. Luckily this baby's so well cushioned it was fine, but my skin is now stretched so thin that the slightest scratch kills! I broke down in sobs, which made Ava break down in sobs and Dave was left standing confused between two sobbing women, neither of whom could verbalise what had just happened!

We are all fine. Just the combination of overtired baby and heavily pregnant mother is not always the best combo! We made friends and explained again to Ava why she is NOT allowed to touch the oven door... Although I think the memory of Mama head down on the kitchen work surface in floods of tears will be as much of a deterrent as any lecture on the danger of ovens! 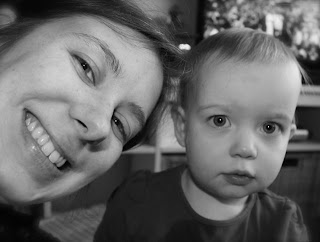 Oh dear. Hormones all over the place! We better hope this next ones a boy; I'm not quite sure Dave would cope with three sobbing women!
Posted by Clarina1985 at 07:00