We are LOVING this sudden change in weather. As Dave said at the weekend, it's almost as though we've skipped spring this year and gone straight from winter to summer... the weather forecast for next week doesn't look so good though, so we are making the most of the sunshine while it lasts!!

Ava loves the outdoors. Every morning, after breakfast, she pulls her shoes on and heads out into the garden, walking her dolls up and down in her little buggy, rides her trike and looks for cats, examines flowers and draws on the patio with her street chalk. She loves the outdoors, and its something I'm really keen to instill in her, whatever the weather!

Yesterday, after her nap, I thought it would be nice to encourage the little explorer in her, and do some outdoor learning (yes, the teacher in me does pop out every now and again!)...

Step 1: Cover your egg box
We covered the box in some coloured paper and then drew boxes over the top to show where the separate containers were. In each "container" box, I drew an object I wanted her to find in the garden, and wrote the word to go with it. Her challenge? To find the things and put them in the right section! The two "extra" sections with the question marks were for her to put interesting things of her choice... 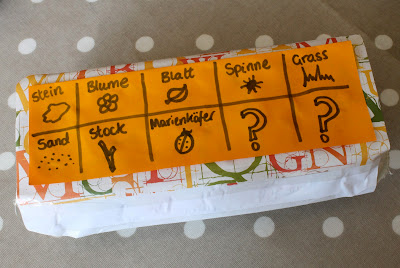 Step 2: Let your child loose in the garden
And off she went... she needed some help in figuring out what the pictures were of... flower, leaf and twig, she figured out for herself... but the stone and sand were a bit too tricky! She very quickly caught on to the idea and would toddle off, returning with the item! We found a spider, but unfortunately he refused to stay in his section of the egg box, so we let him go again! 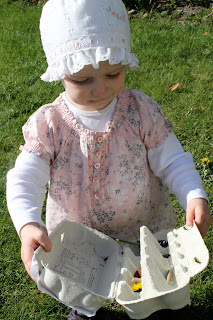 Step 3: Chat about what you've found
Ava had a great time finding all the bits and bobs, and then enjoyed showing her Papa later that evening. We talked about the special things that she had chosen for the "question marks" section, and the activity also provided good opportunity to talk about taking things from the ground, but not picking straight off the tree etc. She was also able to name all the objects and recognise them, so it was a good little vocab exercise too! What a wonderful opportunity, too, to talk about God's creation - about variety, and the different elements that make up the natural world!

Wouldn't it be a great activity to set for the kids if you're heading off on a woodland walk?

I'm off to enjoy some more sunshine!

I've been shortlisted for the BIBs "Inspire" category. Thank you SO much to all of you who nominated me... I am utterly humbled and grateful... and slightly gobsmacked! If you do like the blog and would like to vote for me in the "Inspire" category, you can do so below. Just put a tick in the box beside "Clarina's Contemplations" under the Inspire category! THANKS!