Well, here's the promised tutorial on the Easter baskets. I actually nicked the template from a craft we did at the mother and toddler group I go to, but it was very easy to put together. 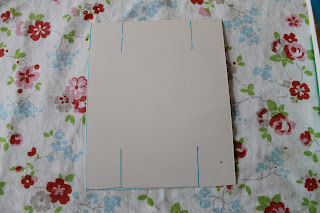 I took a nice piece of A4 card and managed to get two boxes out of each piece of card. I laid the card down landscape and cut an inch strip from along the bottom to make the basket handles. I then cut the remaining large piece of card (still landscape) in half. The drawing opposite shows the template I drew onto one of the halves of the larger piece of card.

One my templates were drawn, I cut down the blue lines to create the basket net, and, using my scissors to score the card, folded along the sides before glueing the flaps to the inside of the basket (As shown below). 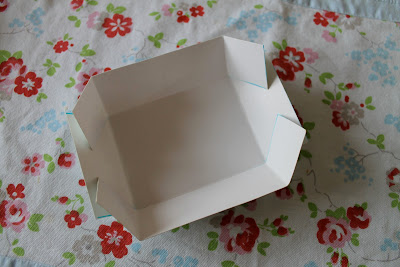 I actually used double sided sticky tape rather than glue because
a) it's less messy
b) it sticks better and isn't likely to fall apart once I fill my basket!

I then used the long strip I'd cut off at the start and cut it in half to make 2 handles. I double-sided sticky-taped them to the inside of the basket as well, and then put one long strip of sticky tape from the side of the basket, over the handle to the other side, as shown below... 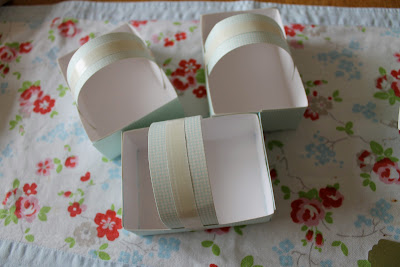 I then peeled off the protective paper and stuck a cute bit of lace ribbon on to make them look pretty.
I also cut a rabbit shape out of complimenting paper and stuck that on the side, just so it was clear they were Easter baskets! 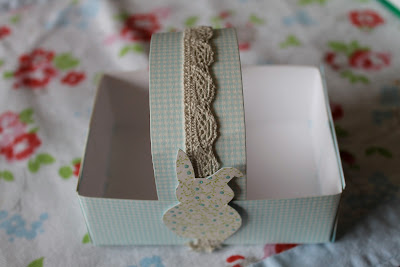 I then filled them up with goodies!
I did buy Cadbury's cream eggs, but they didn't really match my colour scheme, so I wrapped 'em in plain aluminium foil and put some pretty stickers on the front... 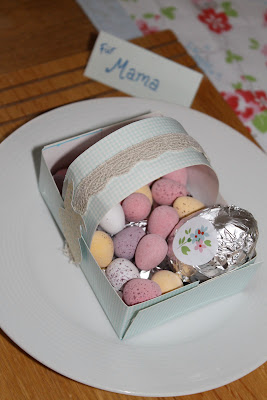 Voila... of course, these could be used for anything really... wedding favours, party bags, birthday gifts. Just customise the decorations to match the purpose!