We had an AMAZING time yesterday at the London olympics... the whole place was alive and buzzing. I have never come across such amazingly friendly volunteers. From the way they catered for us with a baby, to the friendly hello's every time we walked past, the Bolt impressions by passing police officers, the waves from anyone and everyone to baby Ava. Everything. The place was electric and SUCH a special experience for all of us.

At 1.30pm, we packed up all our things, faces painted, and headed in to London for the 2012 games. We got a lot of interesting looks and norwegian greetings from other supporters and had a very straightforward journey in. Having Ava was actually a blessing. We took the buggy, having been informed there were buggy parks there, and so got to go in fast lanes for everything (so that we didn't clog up the queues!!). Everyone was SO helpful and I was so impressed by the positivity and enthusiasm of every single volunteer there. You could just tell they wanted to be there and were just loving the fact they were working at the olympics!

We went all the way to Stratford. Everywhere tells you to get off at West Ham, but Stratford wasn't that busy and we were glad not to have walked the extra 25 minutes as the park is SO big. When we arrived at the station, we still needed an hour just to get into the park and walk across it to the Basketball arena (where the handball was taking place). The park is literally HUGE and heaving with people, although everything is so well organised and spaced out, it didn't feel overwhelming or crowded (good when you have an 11 month old with you)

We headed pretty much straight to the Basketball arena, stopping only to fill up our water bottles and take a few pics along the way. The arena was BUZZING and Kaya's eyes, when we got inside, were literally popping out of her head. Ava was mesmerised. Lights and music and pre-game entertainment. Amazing.

The game was awesome. Norway played brilliantly and finished with an incredible 31-25 lead, guaranteeing them a gold or silver medal. LOADS of goals, and awesome DJing going alongside it which just added to the atmosphere. Thousands of Norway fans with bells and horns and huge flags... pure brilliance.

Amazing game to watch. At half time, Dave took Ava out for a walk, and they ended up down on the balcony with a GREAT view for the second half. Happy hubby.

After the game was over, we waved goodbye to Dave and Ava (Dave's back tomorrow night for the athletics, so he was on bedtime duty!) Sarah, Kaya and I moseyed around the park and headed for some grub in the world's biggest McDonalds. Yum. I am a sucker for fast food.


We hit the superstore and between us bought everything from olympic bands, to t-shirts, to weird toy mascots, to jumpers. After all, the olympics only comes to London once in a lifetime - right? When we were done, we ran to the "Park Live" screens to the background of a roaring cheer echoing from the olympic stadium, just in the nick of time to see Bolt cross the 200m finishing line in first place. What a night for Jamaica... gold, silver and bronze.

Three things that REALLY stood out from the day...

1. The atmosphere - buzzing, electric, lively, celebratory, euphoric, alive and kicking... there really aren't enough adjectives to describe the feeling of so many people gathered together and such an air of excitement and expectation.

2. The most amazingly friendly volunteers you have ever come across - seriously. It was the first thing we said as we walked in the park. Every single volunteer had a huge grin, was so helpful, came over and said hello to Ava, asked if they could help us... the retail staff were friendly and helpful and just so positive. It was so different to anywhere else I've ever been...

3. The game - Norway are a great team, and although they perhaps haven't played the best Handball they've ever played in the run-up to the semi's, they seemed totally back on form yesterday. The goalkeeper was brilliant, saving 54% of goal attempts. They were on fire, and were so easy to support and root for... Handball is also a brilliant sport to watch - fast-paced and quick-moving, its certainly not boring, and you're on the edge of your seat for the duration of the match. Brilliant. Definitely a sport us Brits need to get involved in.

All in all a fab day - made me so proud to be British. It was Great Britain at its best - friendly, welcoming and hospitable, and oh so exciting! We had a wonderful, once-in-a-lifetime day out - a day we won't forget for many years to come. Let's hope these London Olympics do exactly what they aim to - inspire a generation. Here's our little olympian... 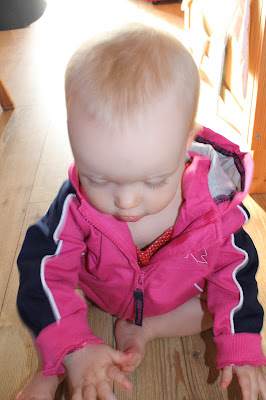 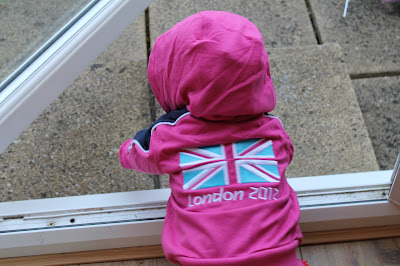