Yesterday morning, Heidi and I headed up to London for my first ever "Blogging Event"... I have, until now, hidden safely behind my computer screen and not raised my head above the blogging parapet, but this past year, I have got to know some other lovely bloggers. So a few weeks ago, when Britmums announced that they were running a Christmas Do sponsored by Morrison's, curiosity got the better of me.

So Heidi and I trundled up to London which of course was an adventure in itself (it seems all journeys are eventful in my book - remember the stormy sea-crossing and lorry relay this summer?); we got stuck getting off a train (half way between the train and the platform) and were eventually rescued by a kind young man, and told off by the guard. Oops!

We rocked up to Waterloo... late, of course, as our train had decided to resemble the trains of 100 years ago and CRAWL the last 4 stations (I am not exaggerating - there was some seriously slow chugging going on!) but hey, the lovely Suzanne from "3 Children and It" and Louise from "A Strong Coffee" had very kindly waited for me. It was lovely to be able to put names to faces at last! We black cabbed it across to the venue (Heidi's first time in a taxi!!) and then met Jess from "Catch a Single Thought" and a few others. Fun, fun, fun!

We walked into the room, and I tell you what... the food was amazing! This is what we were greeted by... 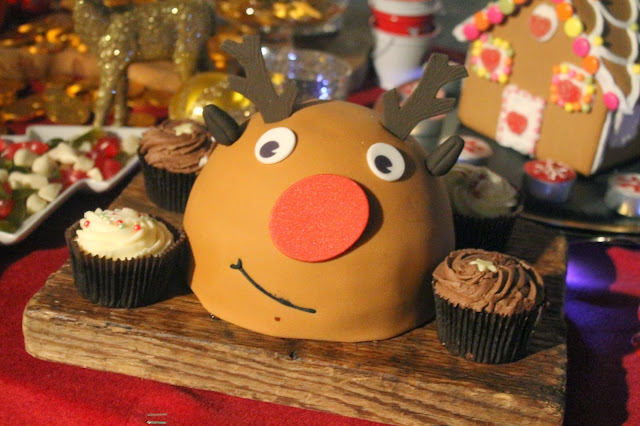 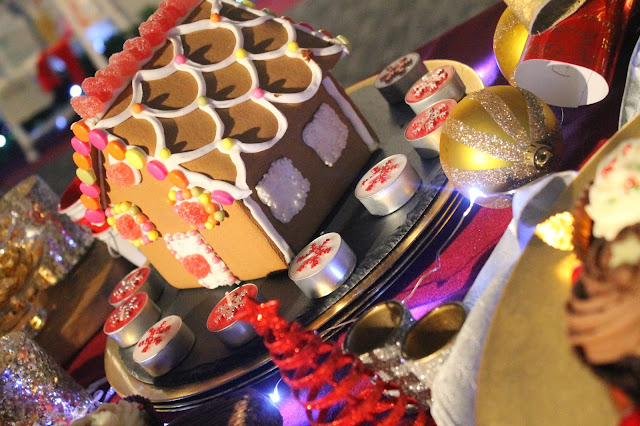 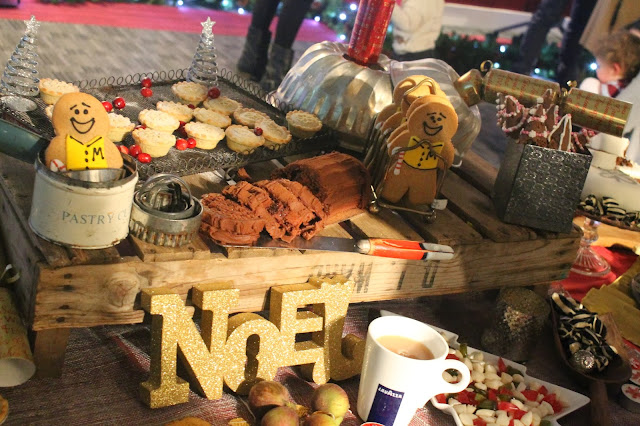 Wow! Seriously... I ate a lot of cake - mince pies, chocolate cupcakes and this yum chocolate orange reindeer bread that was DELICIOUS! Heidi was eyeing up some of the chocolate log, but she was NOT going anywhere near that!

We had a fab question and answer session with Neil Nugent, Executive Chef for Morrison's, who shared his top tips for the perfect Christmas Dinner...

And that's just a taster! I was scribbling all sorts down (and I don't even make our Christmas Dinner - Mum, watch out, I'm going to be giving you tips this year ;-) )

Anyways, we had a very informative time and then got to sit down and have some lunch and catch up with some bloggers that until now, I've only been able to count as "virtual friends"...


Heidi had a whale of a time playing with the fir cones and fairy lights, and the poor child didn't even bat an eyelid when we all suddenly abandoned her. There was a passing comment that Morrison's had said we could take anything we liked from the table before we left, and there was literally a stampede! Everyone single one of us jumped to our feet and flew to the table like vultures; gingerbread houses, cute little buckets, christmas signs and candle holders, mince pies, yule logs, reindeer christmas cakes... all was up for grabs! Oh dear... we were quite a sight!!

After 3 hours of mulling and introducing and asking questions and eating copious amounts we finally decided to head home and, after receiving our jam-packed goody bag, a few of us walked back together, braving the maze of London Roads. With the help of a trusty iPhone we finally managed to navigate ourselves back to Waterloo before saying our goodbyes.

We headed home to pick up Ava who had been having a whale of a time with her little friends Thomas and Phoebe, and this little lady and I had some last quiet minutes catching up on the train before the madness of the evening ensued (but that's another story - one for tomorrow!) She is such a joy to be around, and I love her to bits.

Thanks BritMums and Morrison's for putting on a good show! My first blogging event was a success! Phew!
Posted by Clarina1985 at 07:00