It's a photo every parent has on their mantelpiece... that very first school photo. The little Reception child, smiling angelically and beaming with pure joy that they are finally big enough to go to school. I had it all planned in my head - I'd buy the Reception portraits, and the Year 6 portraits, and that would be it.

And then Ava brought her school photo home.

There's a bit of background to this one... last year, when Ava was in Nursery at a different school, we had a good giggle as the Mums when the photos came back. I don't think its an understatement to say that without exception, our children looked hideous. Grimaces, funny faces, and even closed eyes. It was as though the photographer had asked the children to look as ridiculous as they could, and then taken the shot.

So I hadn't bought the Nursery photo, and consequently, the Reception photo was all the more important. So I opened Ava's book bag with trepidation yesterday and pulled out her Reception photo.

The poor child looked like she was in pain!

"It's not a very nice photo of me, Mama..." she said matter-of-factly. "I don't look very happy, and I've got circles all over my face" (the watermark). I found I couldn't quite disagree with her. I spoke to her teacher at the end who admitted apologetically that a few of them hadn't turned out so well.

I marched home pretty frustrated... one photo... one decent photo. In the days of modern technology where you can see immediately if the photo is any good, why couldn't these photographers seem to get it right?

As a matter of principle, I was not about to part with £30 for a less than flattering picture of my eldest.

I have hundreds of photographs of the girls... but I wanted this one, just this one pretty portrait of her looking lovely in her school uniform against a clear backdrop to put on my mantelpiece and send to the Grandparents.

And so the idea dawned... I'll take it myself! How hard can it be?! 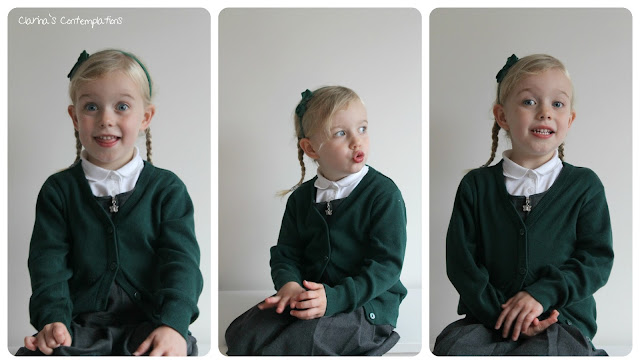 After taking about a hundred photos... and deleting about 90 that either had weird facial expressions or grimaces... I realised that actually these photographers have a pretty tough job on their hands. Four-year-olds have not yet perfected the art of the "natural smile" and posing is not in their repertoire.

After a while, I gave up, and just tried to make her laugh or chat to me... 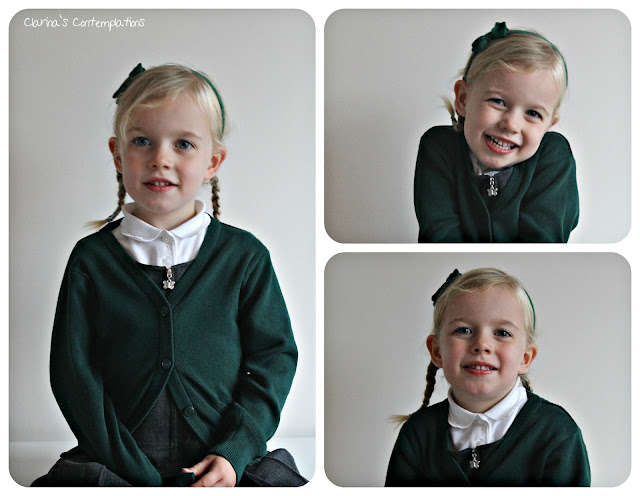 By the time I had shots I was happy with, we'd been trying for about ten minutes. Multiply that by a school of nearly 500 children and I was slightly less irritated with the photographer than I had been at the beginning.

Have you had any school photo disasters?!

Do share in the comments below, and we can all have a good giggle!
Posted by Clarina1985 at 06:30