Linking up with Beth at Home Stories A to Z

Friday was finally the day for Ava's Safari Party!! 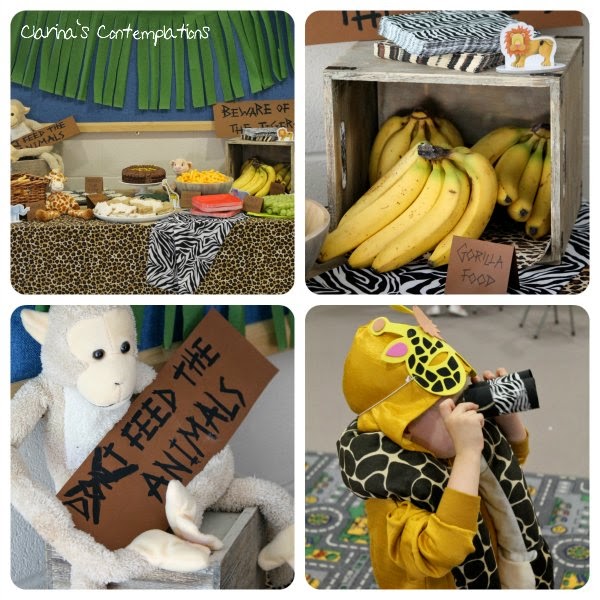 A few weeks back, I asked Ava what kind of birthday party she would like to have. She's a big Lion King fan, so I wasn't overly surprised when a Simba Party was suggested. After a bit of discussion, we managed to settle on a Safari party and I set to work on figuring out how to pull it off...

After a lot of pinterest scouring, a few sketches in my little notebook and an hour of Amazon surfing for anything and everything animal print, I had a good idea of where I wanted to go with it.

And then it was fun, fun, fun!

So, in case you're ever wanting to plan a Safari Party, here's what we did!

The Invitations
I found this really cute design for invitations on Pinterest, and I basically entirely copied it... I didn't go to the extremes of detail that this Etsy company had done, but instead, wrote my own little poem to go on the inside. After Ava had made her list of who she wanted to invite, the invites were sent out! 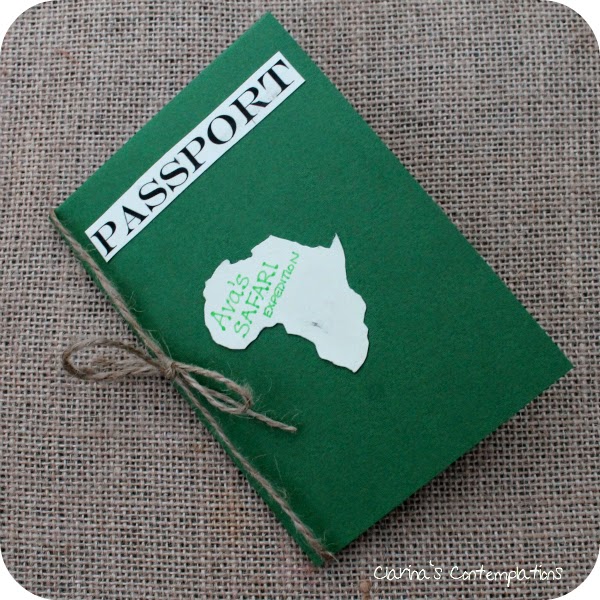 The Entrance
It's possibly my time as a primary school teacher creating displays that's done it, but I love using a bit of creativity to capture a child's imagination... I basically wanted the children to feel a little bit excited about entering the Safari, so I had some fun on the entrance! A little bit of green crepe paper and a bit of brown card can go a long way in making an impact! 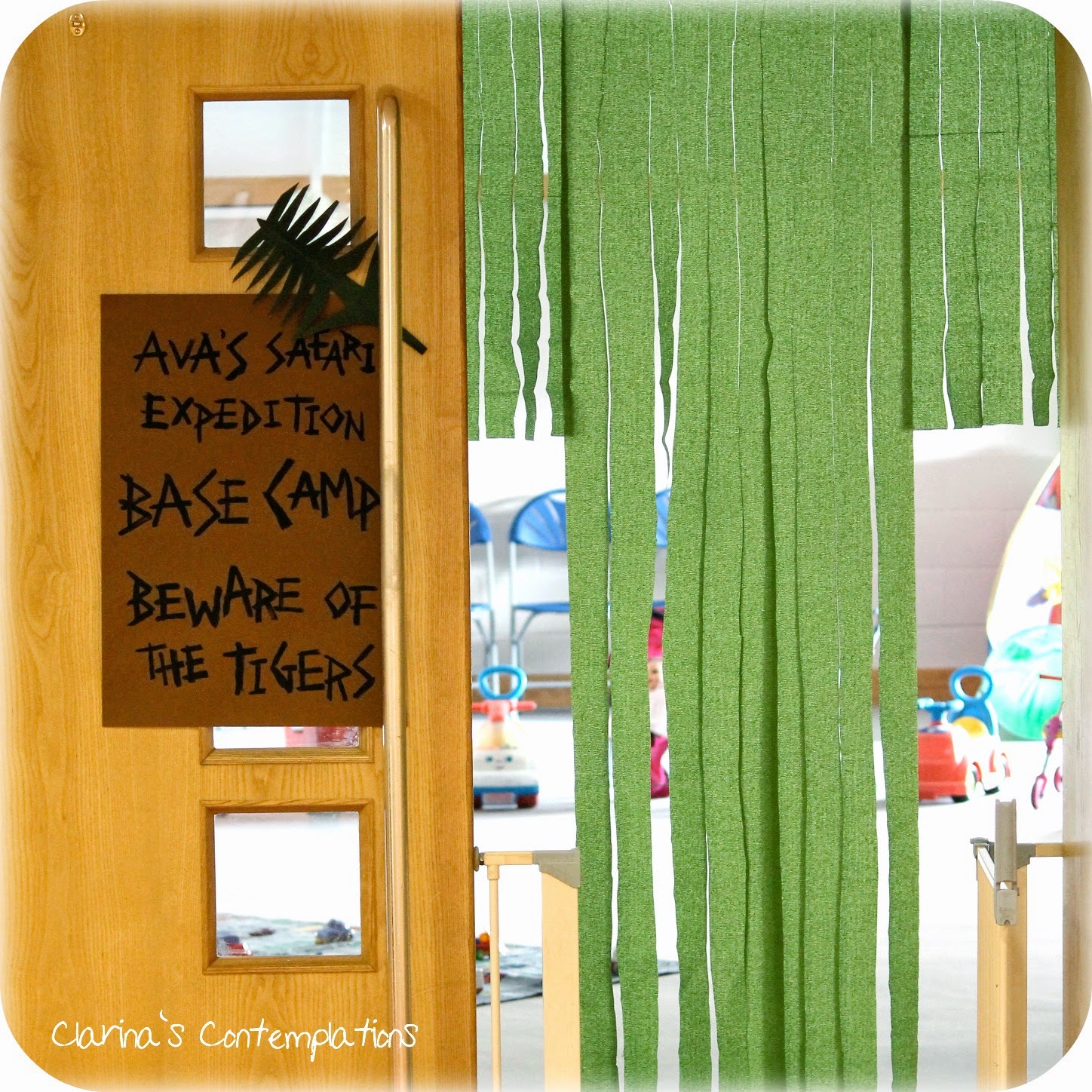 The Food
The food was seriously fun. We made a trip to Lidl at the beginning of the week, and then had fun coming up with creative ideas to make sure all the food was Safari themed. I'm a pretty big believer that most food can be transformed to a theme somehow or other! What was sandwiches, cheese straws, wotsits, cheese, frankfurters and grapes became a jungle feast! The children devoured pretty much the entire table - we were left with two sandwiches and a few bananas by the end. A bit of creativity, and you can pretty much get kids to eat anything! I think the adults quite enjoyed their rhino sandwiches too! 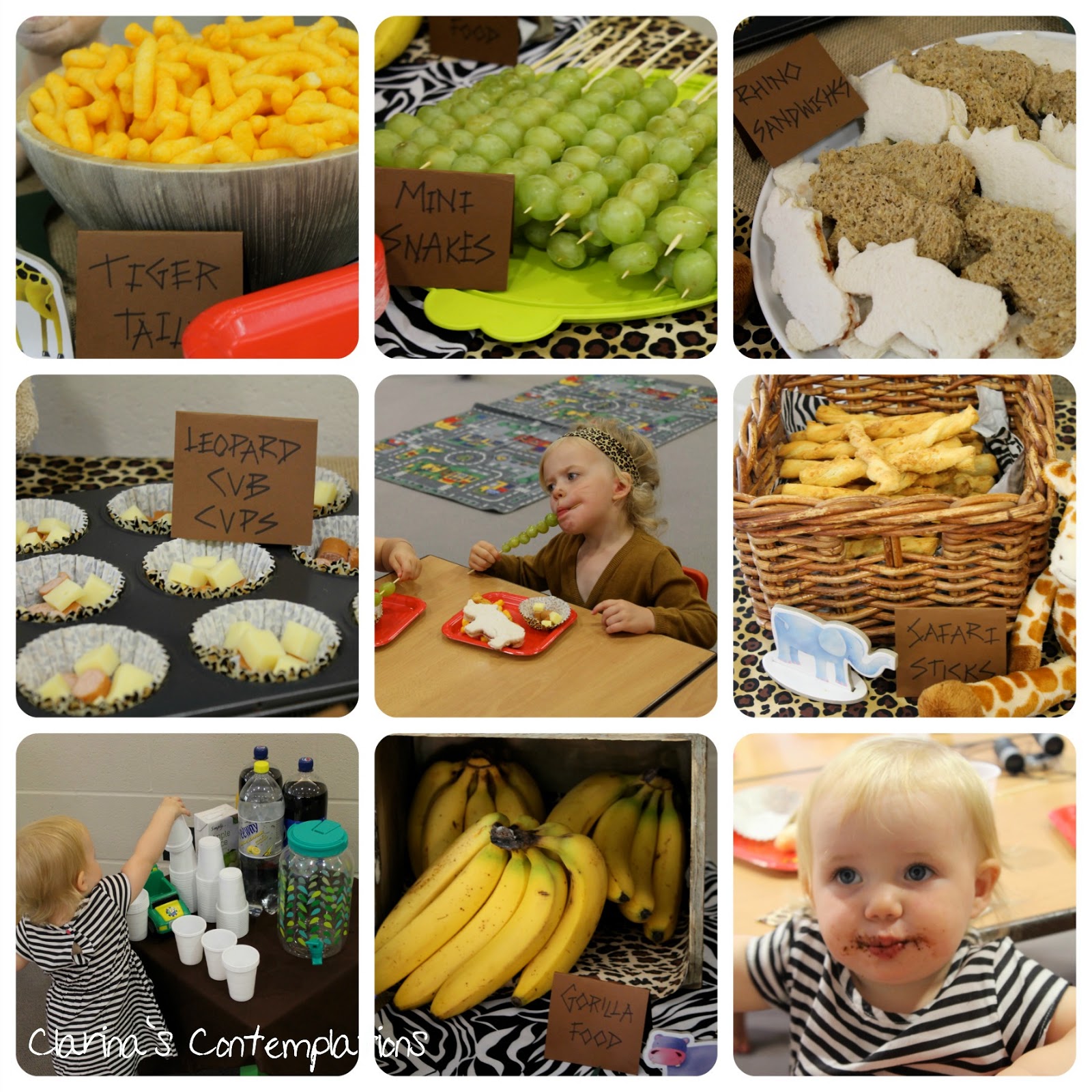 The Costume
There is animal print everywhere at the moment. My original plan was to make little outfits for the girls, in the end, I probably did my usual "bite more off that I can chew" and so I just made little tails for the girls in the end. Literally a rectangle of animal print material sewn up the side, stuffed with wadding and then safety pinned to their clothes. It literally took me half an hour to do both tails - and I think my little birthday leopard and my little zebra looked pretty cute! 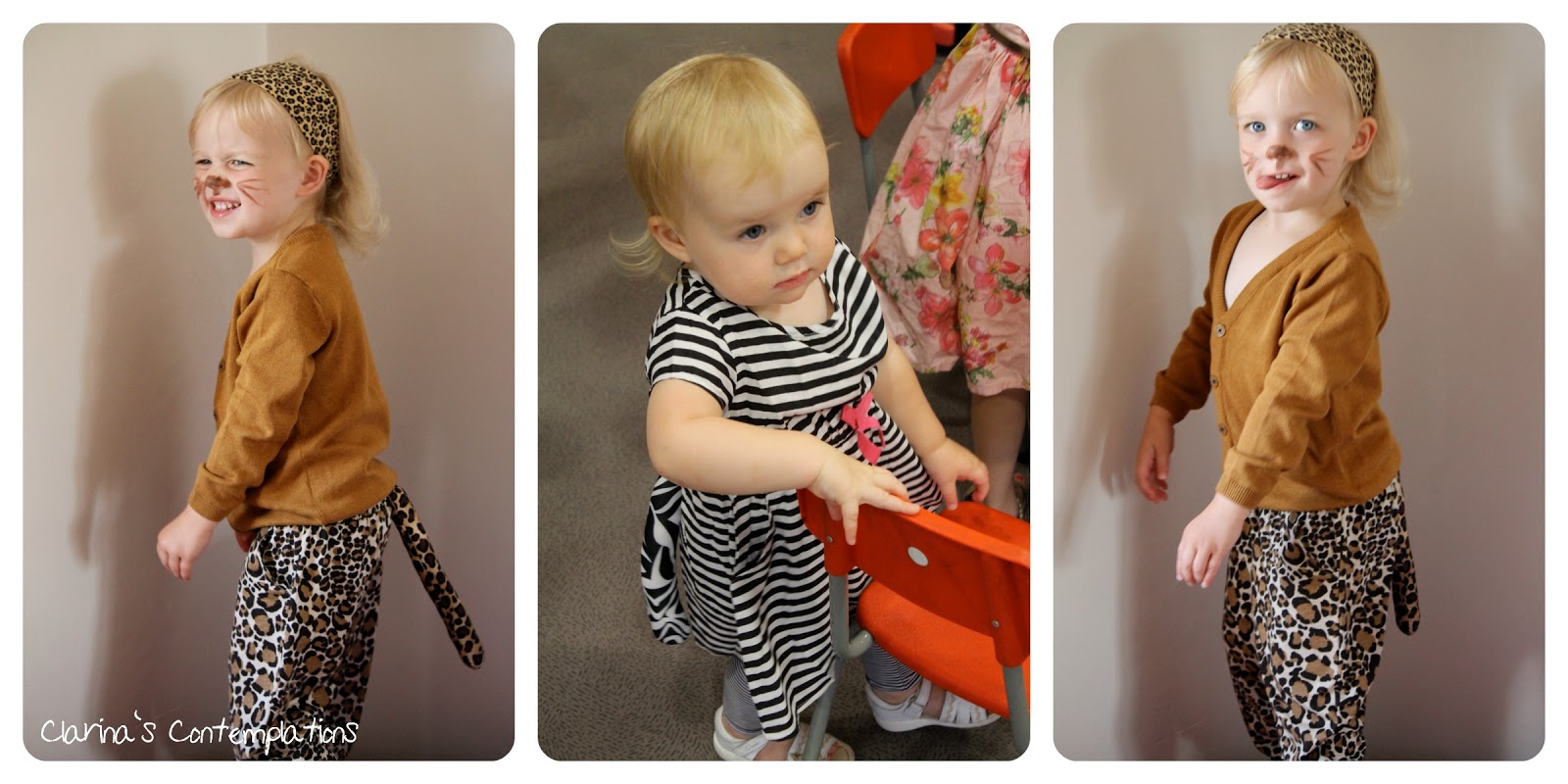 The Cake
This cake was so easy. It is literally and iced chocolate cake. Some plain icing with a fair amount of yellow food colouring (!!), a chocolate button nose, and then piped chocolate icing was all it took. It was so much easier than any birthday cake I've done before, and I was pretty chuffed with the result. It seemed to go down a treat! 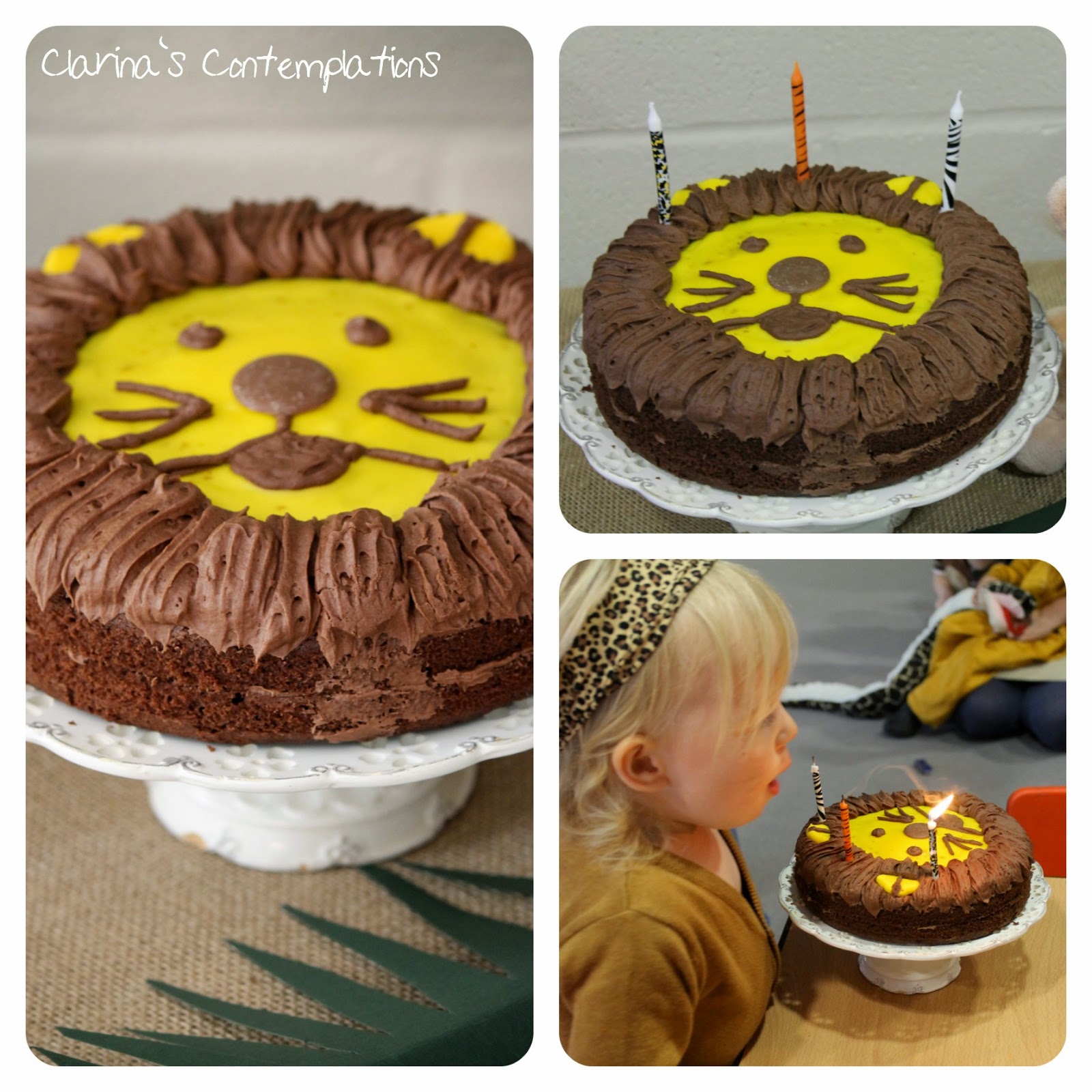 The Craft
I spent the weeks running up to the party collecting loo rolls, and then spent one evening painting them all black. I had found some animal print duct tape on Amazon, and made a mock-up one for the children to copy. The duct tape cost me £3.50, I had a ball of string in the cupboard, and the loo rolls were free... so basically it was possibly the cheapest craft ever made for 15 children! It was so sweet to see the children running around looking at everything through their homemade zebra binoculars!

The Games
I had a couple of games planned, but in the end, decided that the "Safari Stampede" race I had planned was pretty much asking for trouble, so we stuck to a good old Safari Hunt. The children all got a sheet I had made up with the sillhoettes of siz Safari animals on it, around the room, I had hidden six squares with animal skin prints on them, and the children had to "go on safari" to try and find all the animals on their sheet. It was good fun; the adults all got involved, and the children got the nearest thing to a "real safari" we could conjure up here in Suburban London! 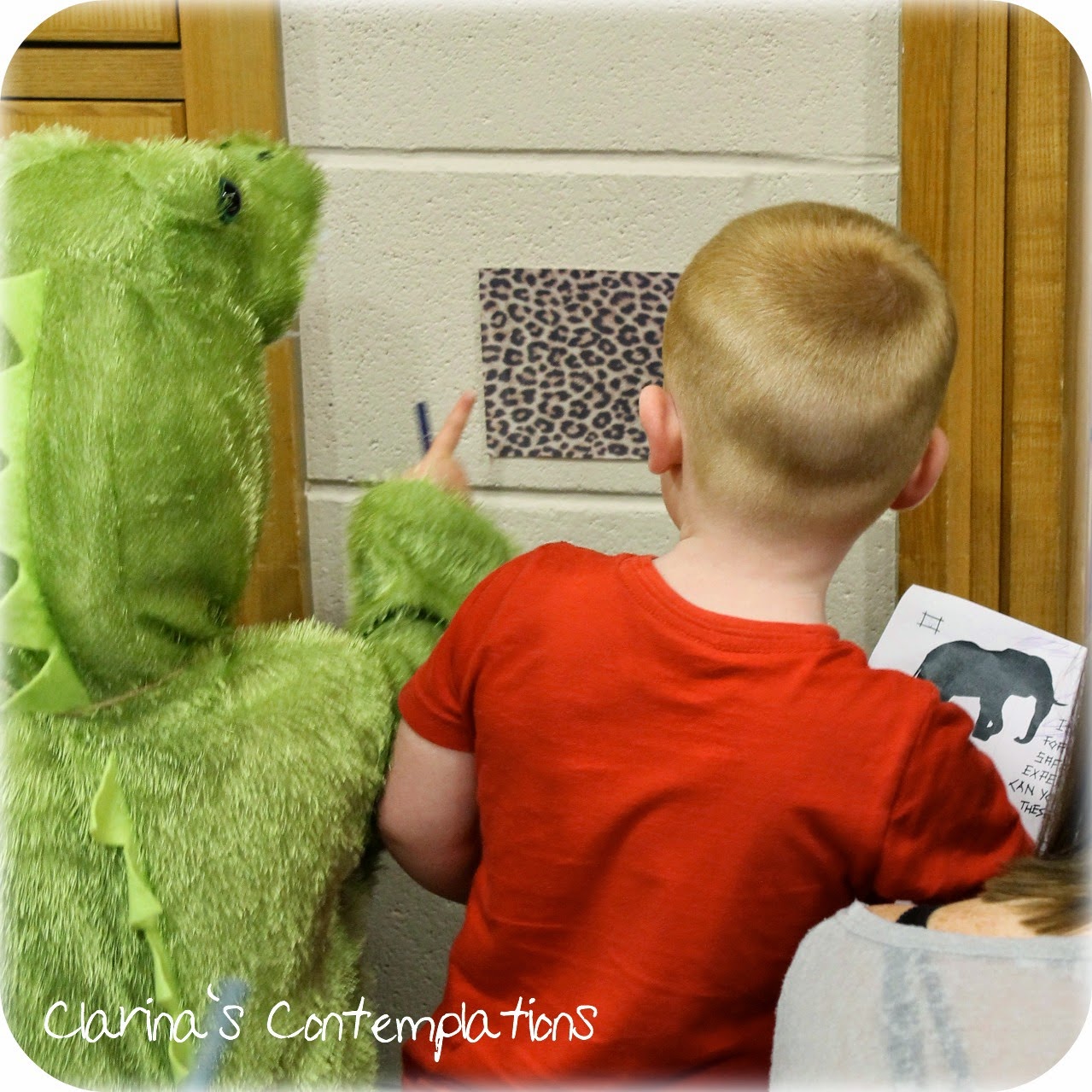 The Favours
To finish up, all the children got a little plastic safari figure to take home with them. I think its always nice to have a little something to remember a party, but party bags can get ridiculously expensive... we got the Safari animals in bags of six, and the kids had fun picking out which one they wanted. Some of the lucky ones got to take home a Safari balloon as well. It was a nice little way to finish the day.

All of us had an amazing time, but it was mainly worth it just to see our little leopard running round the room with her little friends having so much fun. Our big girl! She loved every second of it, and it made handpainting every one of those 40 toilet rolls worthwhile!!! 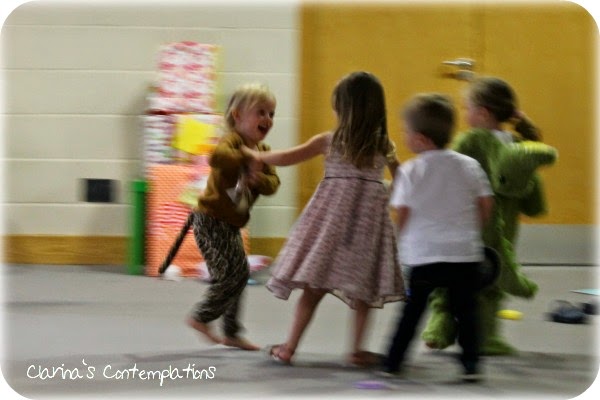 Now I have another six months before another birthday party needs to be organised!
Phew!